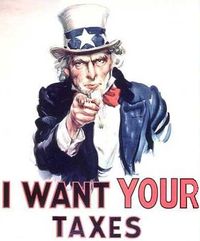 Those millions in tax money that Uncle Sam basically owes himself comes from 70 federal agencies that were responsible for 126 tax accounts that were delinquent at the end of 2011, according to the Treasury Inspector General for Tax Administration (TIGTA).

TIGTA, in its report released today, found that 18 federal agencies had not filed or were delinquent in filing 39 employment tax returns.

"Federal agencies must comply with the same filing and paying standards that apply to all American taxpayers," said TIGTA's J. Russell George.

IRS' internal collection issues: But the report also puts some of the blame on the Internal Revenue Service.

Employees in the IRS' Federal Agency Delinquency Program also suspended collection actions for 34 of the 40 aging delinquencies. Those accounts totaled around $2.4 million.

Because the IRS suspended pursuit of the aged delinquent tax accounts, the possibility that the federal agencies will voluntarily pay their outstanding tax liabilities is very low, said TIGTA.

Naming names, or not: If you're wondering which federal agencies are tax scofflaws, get in line. So am I.

The TIGTA report has plenty of lists with lots of uncollected tax dollar amounts.

But the lists are redacted so as not to disclose which agencies owe back taxes and how much each owes.

The reason, according to TIGTA spokeswoman Karen Kraushaar, is that federal tax law protects taxpayer confidentiality.

That means no taxpayer's information, including taxes owed or delinquent, can be disclosed. And it applies to governments as well as individuals and corporations.

IRS' response: In a letter included in the TIGTA report, Faris Fink, IRS commissioner of the agency's Small Business/Self-Employed Division, said he agrees with much of the report.

However, Fink also noted that his office, which is responsible for collecting back taxes from federal agencies, faces "significant obstacles" because "appropriations law and IRS policies make it difficult to collect delinquent taxes form federal agencies."

Congressional interest expected: If Fink's response isn't an invitation or challenge to Congress, I don't know what is.

And I'm sure lawmakers will take him up on it.

I foresee a Congressional hearing or two based on this TIGTA report when the House and Senate return in November.

The House already has weighed in this year on delinquent federal taxpayers.

In August, Representatives passed a bill that makes most people who are seriously delinquent on their federal taxes -- this typically means folks facing tax liens -- ineligible for federal employment.

The Federal Employee Tax Accountability Act, sponsored by Rep. Jason Chaffetz (R-Utah) and approved by a 263–to-114 vote, was prompted by a report that around 98,000 federal workers owed about $1 billion in federal taxes in 2010.

The tax payment requirement would apply to both job applicants and current employees. But it does make some exceptions, such as allowing federal employment of a taxpayer who is making installment payments on back taxes.

And, not surprisingly, while the bill would apply to Congressional employees, members of the House and Senate are not covered under its tax payment requirements.