The Internal Revenue Service has recommended that Birkenfeld, who served around two and a half years in federal prison for a fraud conspiracy conviction related to the case, get that amount of money as a reward. 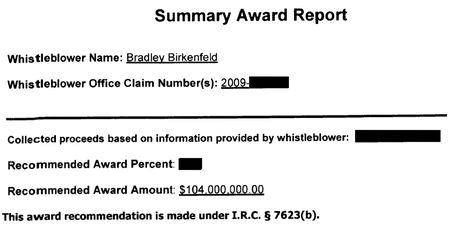 It's the largest whistleblower amount ever awarded by the IRS.

Birkenfeld's insider info helped the IRS collect more than $5 billion in unpaid taxes from foreign banks and nearly 15,000 individuals who used their services to avoid paying U.S. taxes, as well as was a motivator in the Swiss government decision to change its tax treaty with the United States and turn over the names of more than 4,900 U.S. taxpayers who held illegal offshore accounts.

In addition, since the UBS investigation began, more than 35,000 taxpayers have participated in amnesty, or as the IRS prefers to call them offshore voluntary disclosure programs.

Ask and you could receive: The IRS didn't agree to give Birkenfeld the reward out of the goodness of its heart. Rather, Birkenfeld did what any other tax cheat reporting taxpayer would do; he filed a reward claim with the tax agency.

Under federal law, a whistleblower could be entitled to a reward of between 15 percent and 30 percent of the total previously unpaid tax that is collected. There is no limit on the dollar amount that can be paid out to tax cheat reporters. Birkenfeld's lawyers released a redacted IRS summary award report that praised the former banker for providing comprehensive information that was "exceptional in both its breadth and depth."

"While the IRS was aware of tax compliance issues related to secret bank accounts in Switzerland and elsewhere, the information provided by the whistleblower formed the basis for unprecedented actions against UBS AG, with collateral impact on other enforcement activities and a continuing impact on future compliance by UBS AG," said the award recommendation

Birkenfeld was not in Washington, D.C., for today's announcement of his award. He's still serving three years' probation under home confinement. His attorneys are seeking a presidential pardon for Birkenfeld.

In his place, Birkenfeld's brother Douglas read a statement from the newly wealthy whistleblower that said, in part, that he plans to "identify several humanitarian ways to give back in a meaningful and productive fashion."

Birkenfeld's fate: I hope Birkenfeld is pardoned. Law enforcement makes deals with crime participants all the time, many of which include full immunity.

And as Birkenfeld said in his statement, and a point that was repeated by several attorneys and representatives of the National Whistleblowers Center at the press conference, future financial whistleblowers deserve to be praised and protected, not prosecuted.

If Birkenfeld's original attorneys had used the whistleblower statutes, that might have been his fate instead of time in Club Fed.

Today's IRS award announcement shows that the agency believes he was key to its massive and continuing effort to end offshore tax evasion. Birkenfeld should get his life back for his part in that success.

Ratting out tax cheats: If you have information about someone or some company that is ingoing tax responsibilities, follow Birkenfeld's lead. Well, at least the part about reporting the tax misdeeds.

If you suspect or know of an individual or company that is not complying with the tax laws, you may report this activity by completing Form 3949-A. You may fill out the form online, print it and mail it to the Internal Revenue Service in Fresno, CA 93888. (No street address necessary. The Post Office knows where to find the Fresno IRS office.)

If you prefer, you may send a letter instead of the form to the Fresno address. In that case, the IRS would like you to include, where possible, the following information:

About that last bullet point. The IRS says you don't have to reveal your identity. But if information on a tax cheat entitles you to a reward, giving your name and contact info is the only way the IRS will know where to send the money.

Also check out the IRS memo on what to expect when providing the agency with information about tax evasion.

That system has improved over the years, but it still takes a while and requires the actual collection of substantial unpaid taxes before the IRS Whistleblower Office says thanks to tax tattletales with cash.

Still, under the right circumstances, the tax cheat reporting and wait can be very rewarding. Just ask Bradley Birkenfeld.

it takes a thief to catch a thief, or in this case thieves.

so i can commit fraud, go to jail and get a reward for flippin on the company i committed fraud with?...nice