It's Friday. As the song goes, we've all been working for the weekend and that means as soon as we clock out today, we're heading off to celebrate with an adult beverage.

Most of my friends are wine drinkers. Me, I'm a beer fan.

I mean really, when it's hot outside, or your plate of Tex-Mex is hot and spicy, there's no better thing than a cold brew. And have you ever tried taking a long, refreshing chug of wine? Can't do it. Vino just doesn't work like an icy beer.

I just checked my refrigerator and was stunned to discover that I'm out of my favorite beer, Dos XX Amber. That's been added to my grocery list. But until I get to the store, I have enough brews to quench my immediate thirst. 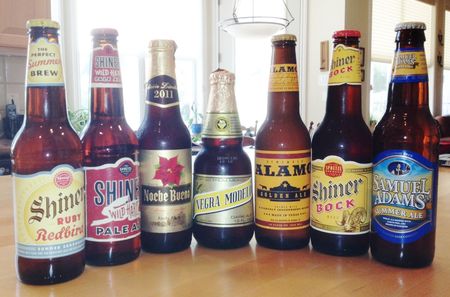 Yes, the hubby and I like the local Shiner offerings, and not just because they're brewed in the Lone Star State. And that bottle with the poinsettia is a Dos XX brew; it's my final bottle of the brewer's special Christmas beer. We also have a remaining bottle of a local microbrewery beer and a major beer company's summer ale.

As you can see, we (mostly me) are open to just about any good, dark beer.

But some folks are trying to take the refreshing head off my drink of choice. They're politicizing it.

What your beer says about your voting inclination: As regular readers know, I'm a big political geek. And I especially enjoy dissecting and discussing election issues. Sometimes a libation or two can really animate the conversations.

But now it seems I'm going to have to pay attention to the brands my fellow beer-drinking wonks choose so I can gauge how they will llikely react to my political observations.

National Journal reports that the beer you prefer reveals your voting preferences.

That probably is news to the GOP, which was, like Heineken USA which imports the beer, not thrilled that the actor who portrays the Dos XX Most Interesting Man in the World in television ads hosted a fundraiser for President Obama.

But it's cool with me. I'm glad to know that I actually share at least one thing with those on the other side of the aisle.

So what beer brand do Republicans most often favor? Sam Adams. But the research doesn't break down the brewer's seasonal beers, so maybe my bottle of Samuel Adams Summer Ale is an outlier.

National Journal's Hotline on Call has a graphic that includes many other beers and where they fall on the partisan scale.

The data and graphic also indicate which beer drinkers are more likely to actually go vote and which ones will probably stay and home and pop another top.

Beer taxes: There is, of course, one thing that all beer drinkers of all political stripes share. Taxes.

Most of us pay sales taxes on the six packs we buy.

The restaurant tabs that include the brews we enjoyed while eating out face some added taxes in some jurisdictions.

And then there are the beer excise taxes.

The current federal excise tax on beer, in effect since 1991, is $18 per 31-gallon barrel. A reduced tax rate of $7 per barrel is levied on the first 60,000 barrels of beer brewed by companies that do not produce more than 2 million barrels of beer per year.

There's been an effort by some federal lawmakers to cut the tax on craft beer makers even further, but it didn't go anywhere in the current Congress. I expect it will be reintroduced next session.

Then there are the state excise taxes on beer. Wyoming has the lowest, 2 cents per gallon. Alaska collects the most, $1.07 per gallon.

The manufacturers pay the excise taxes, but you can be sure that the amounts are factored into the price we beer lovers pay for our favorite drinks.

Brew your own: Of course, you can get around the taxes by brewing your own for your personal consumption.

And if you want to add a political slant here, too, you can.

The current prez has been known to hoist a few brewskis with friends or potential voters.

He hosted the Beer Summit to ease racial tensions. At that 2009 meeting on the White House grounds, the participants drank Bud Light, Red Stripe and Blue Moon.

Whatever your political affiliation or choice of beer, enjoy. And drink -- and vote -- responsibly!