In July when Mitt Romney was catching heat for paying a 2010 personal income tax rate of only 13.8 percent, he defended his filing tactics by saying that if he paid more taxes than were required, he wouldn't be qualified to be president.

Uh, Mitt. You might want to rethink that statement.

Mitt and Ann are sending the U.S. Treasury more money than they had to because they decided not to claim some charitable deductions.

Brad Malt, a partner at Ropes & Gray, LLP, and trustee of the Romneys' blind trust, explained:

"The Romneys' generous charitable donations in 2011 would have significantly reduced their tax obligation for the year. The Romneys thus limited their deduction of charitable contributions to conform to the Governor's statement in August, based upon the January estimate of income, that he paid at least 13% in income taxes in each of the last 10 years."

Of course, cynics among us (where?! where?!) might say the move was motivated by Romney's secretly taped remarks about the 47 percent of Americans who didn't pay federal income taxes in 2011.

What the Romneys gave, paid: Even after erasing millions in charitable donations from their Schedule A, the GOP presidential nominee and his wife still claimed an itemized charitable deduction of $2.25 million, or about 56 percent of what they actually donated last year.

Most of the Romneys' income came from investment earnings, which generally are taxed at lower rates than ordinary, or wage, income.

And all these calculations come to a 2011 effective tax rate for the Romneys of 14.1 percent.

Twitterverse reactions: I was at a conference when I learned about the Romney 2011 tax return via a Twitter blurb, quickly followed by the hubby's text message alerting me of the day's hottest tax news (he's the best!).

In addition to James Carter's facetious observation at the top of this post about how Romney might have doomed his White House hopes, several other social media folks had some smart-ass, funny, biting, insightful or insert your own adjective responses to Romney's release of his tax data.

Below are some of my favorites. Feel free to leave links to others that you like in the comments.

As a former newspaper reporter, I share NBC's chief White House correspondent's thanks that this didn't get buried later in the day.

In an effort to quiet critics who want to see at least 10 years of Romney returns, the former Massachusetts governor has maintained that he's always paid a tax rate of at least 13 percent. We still want to see the forms, not a synopsis.

Apparently Felix had the same problem that many folks did in trying to access Romney's return immediately after it was released.

The Washington, D.C., pundit always has a fun take on political goings-on. 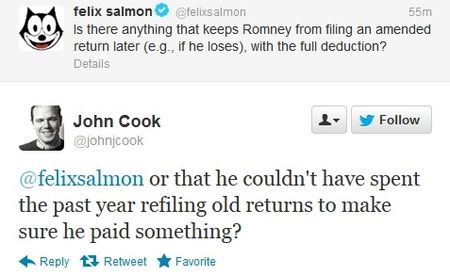 Interesting exchange. And yes, there will be continued speculation about Romney's tax filing practices us, before and after Nov. 6.

Extension reminder: While Mitt and Ann got their 2011 return in 24 days early, if you also got an extension to file, you still have until Oct. 15 to finish your tax forms and get them to the Internal Revenue Service.