Are you ready for some football taxes?

The National Football League kicks off its 2012 season tonight, so naturally I'm thinking about taxes.

Hey, it's my Dallas Cowboys against the New York Giants. Given the Pokes recent history with their NFC East rival, I'll be much less angry and frustrated dealing with taxes than what probably will happen on the field tonight. 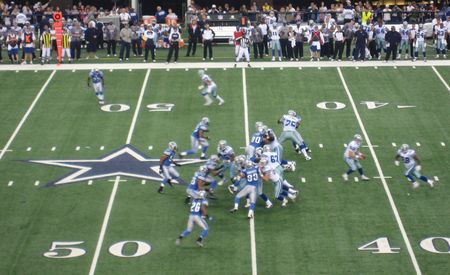 Photo my ME! at Cowboys vs. Detroit game in Jerry's World. We won!

The good tax news is that current NFL players apparently are meeting their tax responsibilities.

But for some former NFLers, it's a different story.

K.R. Hoffman & Co., LLC, a tax advisory firm in Plantation, Fla., reports in its blog that Plaxico Burress, late of the New York Giants and still hoping to catch on with another team this season; Jamal "Dirty Bird" Anderson, a running back for eight seasons for the Atlanta Falcons; William James, a journeyman cornerback for six NFL teams; and, for all you old-time football fans, former Oakland Raiders quarterback Kenny Stabler are all in trouble with the Internal Revenue Service.

These former NFL players allegedly made millions from their on-field days and post-football careers but either didn't bother to file returns or shortchanged Uncle Sam.

Uh-oh O.J.: And everyone's favorite football felon also is in trouble again, this time with the IRS.

The celebrity gossip website TMZ says the IRS last month filed a tax lien against O.J. Simpson for allegedly failing to pay nearly $180,000 in federal taxes from 2007 through 2010.

This alleged tax debt accrued while Simpson was serving time in a Nevada jail for his conviction on robbery and kidnapping charges after a confrontation in a Las Vegas casino hotel room in September 2007 over some of his sports memorabilia.

Apparently while O.J. has been cooling his heels in government housing, his money has been working but, says the IRS, not paying its fair share of taxes.

Simpson's yearly tax debt breakdown by the IRS per TMZ is:

High-paid players are taxpayers, too: It's always a good idea to get tax and financial advice when you find yourself making a more money than you ever imagined, be it from an unexpected windfall or starting out your career as a professional athlete.

Sink, Gillmore & Gordon, LLP, a Manhattan, Kan. (not N.Y.), is one of the many firms that specializes in financial services for pro athletes. Its Pro Sports Tax division created a handout with Tax Information for the NFL Rookie.

The document appears to be for the 2010 tax year because it mentions the Social Security wage base of $106,800 and the 6.2 percent withholding tax. The employee portion of payroll withholding dropped to 4.2 percent in 2011 and is in effect through 2012.

But the basics on deductions still looks to be good advice.

And the firm points out the jock tax that states collect on athletes and other performers who stop by their states to put on a show. It's not an issue for NFL players playing out of town games in Texas, Washington, Florida and Tennessee because those states don't tax wage income.

At other NFL stadiums, however, the players (and coaches) could face jock tax rates ranging from 3 percent in Illinois (Da Bears) to 10.3 percent when they visit California to play the Oakland Raiders, San Francisco 49ers or San Diego Chargers.

Speaking of stadiums: While players, current or former, who don't pay their taxes get lots of attention, we can't ignore how we fans also pay some of our hard-earned money even when we don't buy tickets to the actual games.

Every time a stadium is built with help from tax-free municipal bonds, which is almost every stadium for every sport built in the United States, our taxpayer money helps pay in part for facilities that benefit primarily the wealthy team owners.

I'm not trying to get into the class warfare of funding stadiums. Heck, I voted for such funding for the Ravens home when I was a Maryland resident. Sometimes fan craziness trumps tax savvy. And I'm not alone.

Bloomberg reports that 64 major-league teams, including baseball, hockey and basketball and 22 NFL teams that call stadiums built or renovated in the past quarter-century, are paid for in part by municipal debt.

Tax exemptions on interest paid by muni bonds that were issued for sports structures cost the U.S. Treasury $146 million a year, based on data compiled by Bloomberg on 2,700 securities. Over the life of the $17 billion of exempt debt issued to build stadiums since 1986, the last of which matures in 2047, taxpayer subsidies to bondholders will total $4 billion, the data show.

Those estimates are based on what the Treasury could have collected on interest from the same amount of taxable bonds sold at the same time to investors in the 25 percent income-tax bracket, the rate many government agencies assume. In fact, more than half the owners of tax-exempt bonds pay top rates of at least 30 percent, according to the Congressional Budget Office. So they save even more on their income taxes, a system that U.S. lawmakers of both parties and President Barack Obama have described as inefficient and unfair.

You might want to consider that the next time you're at the game and about to buy a $10 beer. Perhaps a cheaper beverage might be a better choice since you've already paid so much in taxes for the game.