We Americans aren't the only ones watching opposing political parties duke it out over the tax burdens and responsibilities of wealthier citizens.

In Great Britain, liberal and conservative politicians are having the same fight.

The latest across the pond tax volley was fired by Deputy Prime Minster Nick Clegg, leader of the Liberal-Democrat Party, who has proposed a one-time emergency tax on the wealth, rather than the incomes, of rich Britons. George Osborne, Chancellor of the Exchequer (roughly the United Kingdom's Treasury Department Secretary; that's him pictured there to the right), quickly torpedoed the idea, saying such a tax would cause Britain's wealthy residents to leave the country and make economic recovery even worse.

Or, as the chair of the House of Commons' public administration committee so colorfully characterized it, a wealth tax even on a short-term basis could strangle the golden geese of Britain.

Sounds like the same arguments we've been hearing in the United States ever since the Bush tax cuts' original 2010 expiration date passed.

Legal, but 'morally repugnant:' But while Osborne doesn't want to add a new tax on wealthy Britons, he is not pleased that so many of them take advantage of the U.K. tax code to dramatically lower their tax bills.

In many cases, according to data from Her Majesty's Revenue and Customs (England's Internal Revenue Service), these rich individuals reduced their income tax rate to an average of 10 percent, less than half the level paid by the average Briton.

Sounds very much like tax inequity complaints made in the United States and the ensuing discussions now underway on Capitol Hill and campaign headquarters on ways to revise our tax code, doesn't it?

In March, after a popular British comic's participation in a legal tax-cutting scheme was revealed, Osborne announced a general anti-avoidance rule and other measures to deal with U.K. tax avoidance.

In his budget speech, Osborne lashed out at such tax techniques:

Most wealthy people pay their taxes, and without them we could not begin to afford the public services on which the country depends. But under the last Government, it was the boast of some high earners that, with the help of their accountants, they were paying less in tax than their cleaners. I regard tax evasion and indeed aggressive tax avoidance as morally repugnant.

In this regard, it looks like Osborne at least has the hearts of most of his countrymen and women when it comes to enforcing taxes. 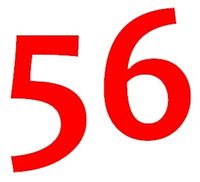 A recent survey by Christian Aid, a London-based church network that focuses on anti-poverty efforts, found that 56 percent of British adults believe that tax avoidance by multinational companies, while a technically legal way of reducing what they owe the taxman, is morally wrong.

That percentage also is this week's By the Numbers figure.

Seventy-five percent of those surveyed also said that large global corporations are treated more leniently by the U.K. taxman than are individual taxpayers.

And almost as many (74 percent) of those polled by Christian Aid said U.K. Prime Minister David Cameron should be demanding international action to tackle tax evasion and avoidance.

Only 38 percent of the Christian Aid survey takers believe their government is sincere in its avowed desire to combat the loss of tax money via legal loopholes.

Hmmm. So Brits join us Yanks in thinking that our politicians and elected leaders often say things they don't actually intend to do.

I also find it very interesting that the country America fought for independence from in large part because of taxes is, some 236 years later, internally waging so many of the same tax battles that we've having here on this side of the Atlantic.

Maybe George Bernard Shaw's oft-quoted phrase should be revised to say England and Americas are two countries separated by a common language, but still united in their continuing tax travails.

It is becoming increasingly clear that this Govt has nothing to offer and that it is only in power because of the abysmal mess inherited from the previous Labour Govt . Had Labour made only a reasonable fist of governing they would have been in power now. We do not deserve these no-hopers, creaming off expenses for non existent expense, STILL, and muddling along with laughable (if it wasnt so serious) granny taxes and so forth whilst complaining about citizens taking what steps the law allows to minimise their tax overhead. There has to be a better way and Cameronan Osbourne arent it.
https://paydayloansat.com/