Taxmageddon. There, I said (and typed) it.

Yeah, it's a silly sounding word, but so is taxopocalypse and the idea of all of America lined up at the edge of a fiscal cliff.

Wait, let's just picture that last hypothetical scenario for a minute, with Representatives and Senators periously close to land's end. OK, I'm back from that little fantasy.

But what all these words and images try to illustrate is how serious our financial situation could become on Jan. 1, 2013.

Unless federal lawmakers act, on that day a raft of expiring laws could mean higher tax rates on income, investments and families. 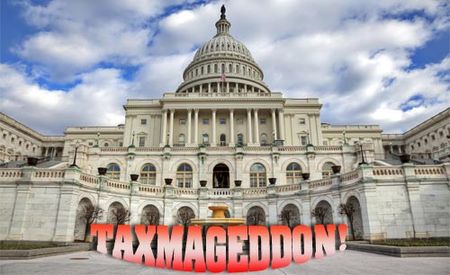 Such a possibility has lots of folks fearful, frustrated and more than a bit angry. And the countdown to Taxmaggedon also is this week's Weekly Tax Tip.

Will our personal  and the country's, tax and fiscal situations blow up next year? Not likely.

But any thoughtful person has to do some evaluation and make as many plans as possible just in case.

I predict bet hope suspect that Congress will take action, but not until after the November election.

The House and Senate already have passed tax bills that deal with expiring Bush tax cuts. And the two chambers' tax-writing panels have done some groundwork on the extenders, those technically temporary tax provisions most of which already expired on Dec. 31, 2011.

All we're waiting for is bragging rights after Nov. 6.

If voters choose to keep things essentially the same -- that is, control of Congress and the White House shared by Democrats and Republicans -- then look for a short-term extension (likely a year) of the status quo.

If, however, one party gains control of the House, Senate and White House -- and by one party I mean the Republicans since they have a better shot at grabbing all three than do the Democrats who hold a very slim Senate majority -- then look for legislative action to be pushed into January.

That's when the then fullly in charge GOP would deal retroactively with tax laws the way they want.