Ryan vs. Romney on taxes

It's been a political love fest today as Republican presidential hopeful Mitt Romney announced that Rep. Paul Ryan is his running mate. 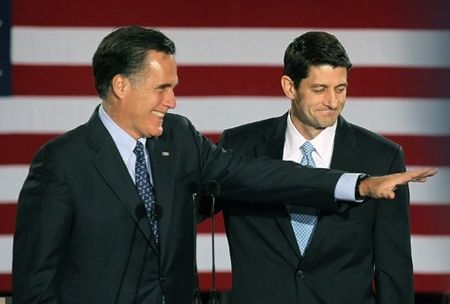 Quick pairing clarification: Calm down jubilant conservatives. Ryan will be the vice president, VP, veep, not the Oval Office occupant, if the Romney-Ryan ticket wins the coming election. Today's "next president" misspeak by Romney was no more significant than the similar gaffe committed by Barack Obama when he revealed Joe Biden as the next president vice president back in 2008.

Romney's verbal misstep aside, spirits are high among the Grand Old Party. Ryan is young, articulate, has shown a willingness to go head-to-head with opponents and, as noted, more politically acceptable to the Republican party's right wing base.

But there's also a significant amount of love of the Ryan choice on the Democratic side, primarily because the Wisconsin Republican has long argued for changes that would essentially eliminate Medicaid and Medicare and substantially change Social Security.

Those programs are core to the Democratic platform. And Ryan's proposed changes weren't as popular as he or his party had hoped.

You can, however, count on them soon being resurrected, just not legislatively. The Ryan plans will appear prominently in Obama campaign ads.

Tax ideas, too: Ryan also has some ideas about taxes, refined in his capacity as chairman of the House Budget Committee and member of the tax-writing Ways and Means Committee.

In fact, many of the Ryan proposals were included in the tax bill that the House approved before heading out for the August recess district work session.

And the new presumptive GOP veep's revenue proposals differ not only from the Democrats' positions, but also a bit from Romney's proposed tax law tweaks.

The table below highlights the Romney vs. Ryan tax plans.

Ultimately, though, both the Ryan and Romney tax plans would provide substantially bigger tax savings for the wealthy than would the Obama plan.

Initial word from the Romney camp is that presidential wannabe is not planning to embrace either Ryan's Medicare or tax plans in the push for the White House.

But things could change as we near the Nov. 6 election day, so stay tuned.