Two. That's how many full tax returns Republican presidential nominee Mitt Romney says we'll eventually get from him when he files his now-on-extension 2011 taxes.

Romney's been taking heat for not offering us a larger look at his annual Internal Revenue Service filings. That's likely to continue all the way to Nov. 6.

Personally, I think Romney should show us more of his tax returns. But he's not the only candidate to stop at two.

That's how many years' worth of federal tax returns the last GOP seeker of the White House made public. In 2008, Sen. John McCain (R-Ariz.) released just his 2006 and 2007 returns.

And that limited number of tax returns also is this week's By the Numbers figure.

Tax privacy precedent? Romney cited what he termed the precedent set by McCain in releasing only returns for two years. But McCain and now apparently Romney are the exceptions.

And over the last 30 years, presidential candidates of both parties have each released more than two years of tax returns, according to Factcheck.org.

Graphs created by the nonpartisan research project of the Annenberg Public Policy Center of the University of Pennsylvania show how Republican and Democratic presidential candidates have responded to the tax return revelation challenge.

Republican returns: As Factcheck's GOP analysis shows, part of the pressure on Mitt Romney comes not just from Democrats, but also from the 12 tax returns released in 1968 by his candidate father, George Romney. 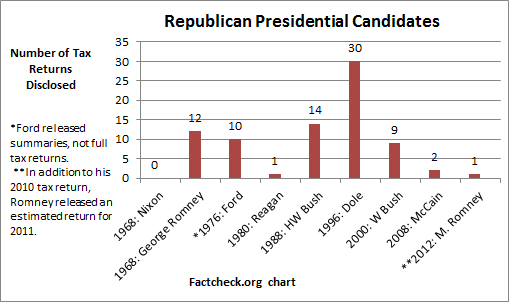 Republican icon Ronald Reagan was an even bigger tax return holdout than McCain and Romney, handing over just one return when he first ran for president in 1980. The Gipper did, however, follow presidential tradition and release the returns he filed after he moved into the White House.

And the Republican candidate with absolutely nothing to hide was Bob Dole, who released 30 returns in 1996.

Democratic returns: On the Democratic side, Jimmy Carter was the most private of the presidential candidates who did turn over tax returns. Factcheck reports that he released just one of his filings before being elected president. 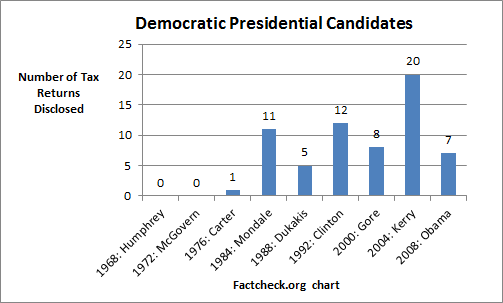 And while we've had looks at Barack Obama's filings since he's been in the Oval Office, when he first ran for the job he offered us seven years of his 1040s.

You can see more presidential and candidate tax returns at the Tax History Project.