Romney horseplay pays off at Olympics and tax filing time 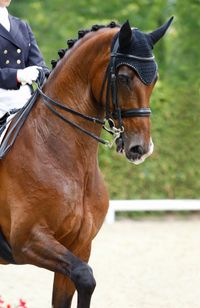 I know you're as excited as I am about today's London Olympics schedule. That's right, kiddies. The dressage competition has begun!

If you're like most Americans, you've just learned about the fancy-schmancy sport of dressage (pronounced like massage) thanks to Mitt and Ann Romney.

The Republican presidential candidate's wife owns a one-third interest in the horse Rafalca, via her participation in Rob Rom Enterprises LLC.

The mare and her rider, Ann Romney's riding instructor Jan Ebeling, are competing in Olympic dressage events. In the early rounds, the horse ranked fourth.

And most of what you've probably read, be it info from conservatives or liberals, about the Romneys, Rafalca and associated tax benefits connected to part ownership of the animal is probably wrong.

The loss claimed on the Romneys' 2010 tax return is not a hobby loss, a typical tax deduction or a tax credit.

It is, notes Donald Tobin, an associate dean (and more) at Ohio State's Moritz College of Law, a passive activity business loss. Mrs. Romney isn't sufficiently involved in the business of Rafalca to be an active owner, hence its a passive business for her.

And the tax code has specific rules on accounting for such passive activity losses.

So while the Romneys did spend $77,731 two years ago on Rafalca's expenses, which they reported on that year's tax return, Tobin notes via TaxProf Blog that the potential presidential couple was only allowed to deduct $49 of those expenses on their return. Tobin explains:

Oh, as Emily Litella would say, "that's different." But we won't go as far as Emily's "never mind."

Lots of tax work for little benefit: In fact, we're curious as to why the Romneys would go to all that tax filing bother to claim only $49. They obviously were in the top 35 percent tax bracket so that passive activity loss translated into just $17 worth of tax savings.

Oh don't you worry about the Romneys tax-filing and paying savvy. They knew what they were doing with the horse-related claim.

They still might get a tax break from all those Rafalca expenditures in future tax years, thanks to the option to carry over the excess loss to offset future passive income.

And once a money-losing passive investment is sold, that remaining loss can then be claimed against non-passive taxable income.

"Any unused suspended losses are allowed in full when the taxpayer disposes of his or her entire interest in the activity in a fully taxable transaction," says Mark Luscombe, a principal tax analyst with the tax publishing and software firm CCH.

So don't be ticked off about the Romneys' 2010 $49 tax break. Save your outrage for when Ann eventually sells her share of Rob Rom.

Just because it is on the return doesn't mean it's not a hobby. I find it hard to believe there is a profit motive as needed to list it at all, deferred or not. I'd like to hear Romney's explanation of this.