And it's likely that some of those ITIN-bearing returns were fake, meaning Uncle Sam never should have sent the resulting tax cash back to the fraudulent filers.

That's the finding of a recent Treasury Inspector General for Tax Administration (TIGTA) investigation, which was prompted by complaints of IRS employees about the lax ITIN verification process.

The ITIN system was created in 1996 as a tax-filing identification system for individuals who must report their income but who aren't eligible for Social Security numbers, the standard tax ID number.

The IRS' position has always been that its core business is collecting taxes, not enforcing other laws such as immigration.

But some of the agency's personnel believed their bosses weren't doing that basic job properly because employees were encouraged to assign ITINs even when it appeared applications were false.

Time for TIGTA: The concerned workers told members of Congress that "IRS management is not concerned with addressing questionable applications and is interested only in the volume of applications that can be processed, regardless of whether they are fraudulent."

Yes, it appears that ITINs were rubber stamped in much the same way that some police agencies sometimes demand their officers meet ticket quotas.

But rather than bringing money in to a local government as ticket fines generally do, ITIN returns hold the potential to get fake filers fraudulent refunds.

So Capitol Hill turned the complaint info over to TIGTA, which confirmed the IRS employees' charges.

TIGTA said the ITIN application review and verification process "is so deficient that there is no assurance that ITINs are not being assigned to individuals submitting questionable applications," permitting possible tax fraud to go undetected.

And while neither TIGTA nor the IRS can say definitively how much of the $6.8 million in 20011 ITIN-related refunds was improperly paid, but investigators noted in the report that, "There is a potential that erroneous tax refunds are going to non-qualifying individuals, allowing them to defraud the federal government of billions of dollars."

Taking it to the top: Now Congress wants to hear from top IRS management about the broader implications of the fake ITIN issue.

"It's one thing if the IRS tries to catch fraud and fails, but it's quite another when management apparently takes steps to weaken program integrity," said Rep. Charles W. Boustany, Jr. (R-La.), chairman of the Ways and Means Oversight Subcommittee, after reading TIGTA's findings. "The IRS needs to immediately account for the findings in this report."

So Boustany immediately shot off a letter to IRS Commissioner Douglas Shulman. 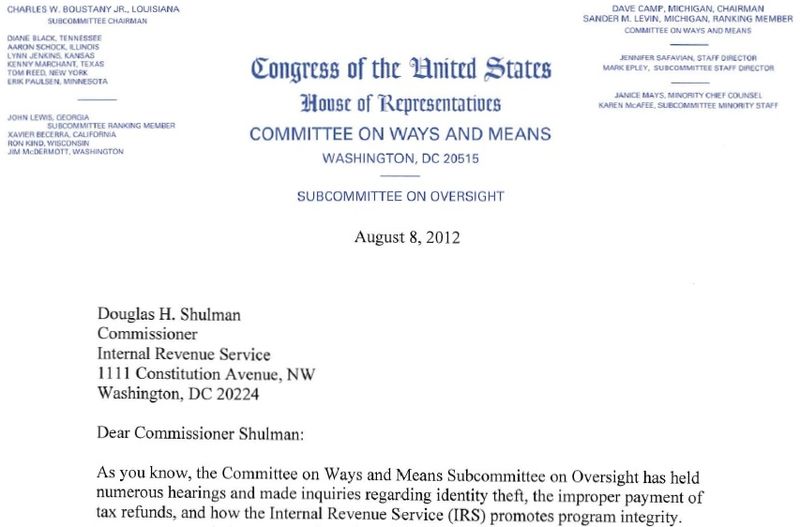 The TIGTA report, wrote Boustany, "raises concerns not only about the IRS's ability to catch fraudulent tax returns, but also suggests the Agency has significantly reduced efforts to detect and prevent fraud. … In one case, TIGTA officials confirmed that an IRS official stated that tax fraud was a good thing because it ensured job security for tax examiners."

I suspect in the wake of this investigation, someone's job is no longer secure.

Boustany wants to hear back from the commissioner by the end of August on several IRS strategies, procedures and employee training protocols to identify potential tax fraud.

I join the Ways and Means member in looking forward to Shulman's answers.