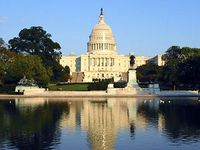 Before members of Congress escaped hot, muggy Washington, D.C., for their annual August recess -- sorry, district work session -- the House agreed to a bill that would speed up (as much as that's possible by Capitol Hill standards) legislation to remake our tax system.

The Pathway to Job Creation Through a Simpler, Fairer Tax Code Bill of 2012, known by the Clerk of the House as H.R. 6169, would establish a fast-track process for House and Senate consideration of comprehensive tax reform next year.

The bill, which was approved by a 232-to-189 vote, requires the chairman of the House Ways and Means Committee to introduce comprehensive tax reform legislation by April 30, 2013.

U.S. vs. them: A quick note about tax reform principle number 5.

The U.S. currently uses a worldwide taxation system. In a nutshell, that means the Internal Revenue Service collects taxes on our money regardless of where across the globe we earn it. Because this is our complicated tax code, some U.S. tax considerations are offered in exchange for the taxes we might have already paid the jurisdictions where we got the money.

A territorial system, on the other hand, would essentially call for taxes to be collected only by the tax administrators of the countries in which the money was made.

Next tax steps: H.R. 6169 now will be combined with H.R. 8, the Job Protection and Recession Prevention Act of 2012, aka the House tax bill that was approved by Representatives on Aug. 1.

Whoa up there Congressional cowboys: And there's where we hit the first roadblock on this so-called fast track.

The Senate also has passed its own tax bill. And the Democrats who are in charge there aren't going to take fondly to the Republican-led House's tax proposals.

But at least some bills are being passed, even if just symbolically in order for Senators and Republicans to go home and tell their constituents that they at least did something in D.C.

We'll see what they can really do when they get back to Washington in September.