In July, the average state gasoline excise tax was 21 cents per gallon, up fractionally from the American Petroleum Institute's April gas price survey.

And all other state charges -- sales, gross receipts, county and local taxes, as well as oil inspection, underground storage and various environmental fees -- account for 9.5 cents paid on a gallon of gas. These other taxes and fees also were down slightly from April.

That meant the average tax amount that U.S. drivers paid on each gallon of gas in July was 48.9 cents.

That's also this week's By the Numbers figure.

Fill 'er up: You might want to remember that tax amount when your gas prices go up here in the next few days.

And yes, they will go up.

And yes, some folks will immediately start pointing fingers at lawmakers in misguided attempts to make political points.

But geography is as much to blame as anything. That and greed.

As the the National Hurricane Center forecast map below shows, Tropical Storm but soon to be Hurricane Isaac ... 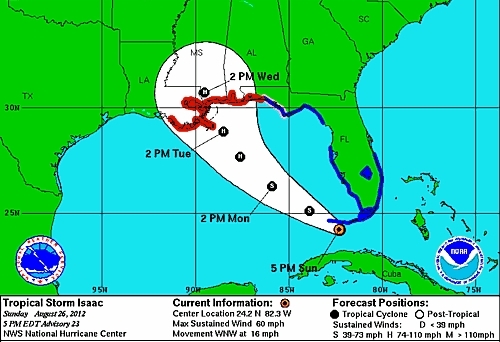 ... is heading right to the heart of the Gulf of Mexico's offshore oil rig field. 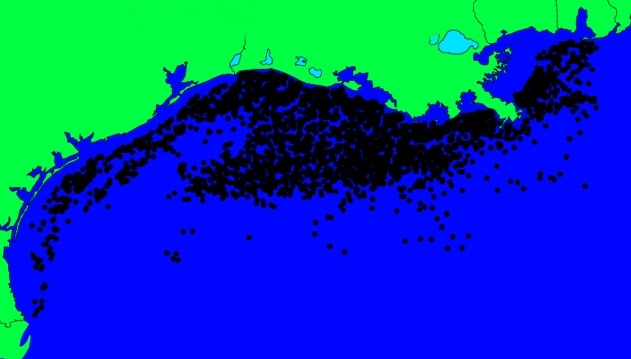 However, it's not so much the closing and evacuation of the offshore rigs that causes us to pay more to refuel our cars.

These facilities provide the fuel for most of the eastern half of the United States, meaning that if production is disrupted for too long, states must dip into emergency fuel supplies or pay a premium to import fuel from somewhere else.

That happened in 2008 when Hurricane Ike struck the Texas coast.

Of course, the gas station price boards reflect higher fuel costs the minute a tropical system gets into the farthest reaches of the Gulf.

A cynic might say that oil companies and gasoline dealers take advantage of the bad weather to jack up prices even before a storm's full effect is known.