The Moving Ahead for Progress in the 21st Century Act, or MAP-21 and also known as the Highway Investment, Job Creation, And Economic Growth Act Of 2012 (see my earlier rant about Congressional naming conventions for bills), is now awaiting Obama's signature.

In addition to giving the OK for highway projects, the bill extended the national flood insurance program and, to the relief of students (and their parents) maintains for another year the 3.4 percent interest rate for federal student loans.

So how will the new highway bill be paid?

Per usual, Congress did some financial finagling to help cover the bill's $120 billion price tag.

Pension reforms and higher premiums for the Pension Benefit Guaranty Corp will make up some of the revenue.

Tapping tobacco: And smokers who avoided cigarette excise taxes by rolling their own also will contribute to the highway bill's bottom line.

Yep, Senators and Representatives found a way to extend the tobacco sin tax. 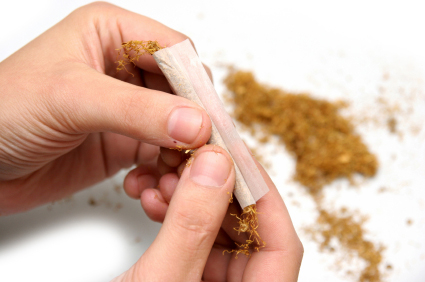 The definition of tobacco manufacturers now includes businesses operating roll-your-own cigarette machines, raising $94 million over 10 years from the now applicable federal cigarette tax, according to the revenue estimates from the Joint Committee on Taxation.

SEC. 100122. ROLL-YOUR-OWN CIGARETTE MACHINES.
(a) IN GENERAL.—Subsection (d) of section 5702 of the Internal Revenue Code of 1986 is amended by adding at the end the following new flush sentence:
"Such term shall include any person who for commercial purposes makes available for consumer use (including such consumer's personal consumption or use under paragraph (1)) a machine capable of making cigarettes, cigars, or other tobacco products. A person making such a machine available for consumer use shall be deemed the person making the removal as defined by subsection (j) with respect to any tobacco products manufactured by such machine. A person who sells a machine directly to a consumer at retail for a consumer's personal home use is not making a machine available for commercial purposes if such machine is not used at a retail premises and is designed to produce tobacco products only in personal use quantities."

Frugal smokers are, well, smoking mad about this tax. They see it as Uncle Sam's attempt to shut down the hand-rolled cigarette market, forcing them to buy the more expensive, and taxed, packaged tobacco products.

Their fears seem to already be realized, at least in parts of the upper Midwest. Owners of eight Discount Smokes stores in Wisconsin have stopped running their centerpiece roll-your-own machines.

The stores' business model, reports the Wisconsin State Journal, was to rent time on jukebox-size machines to customers who then handled cigarette rolling operations so that the owners would not be considered manufacturers. In exchange for a little effort making their own smokes, customers paid about half the price of a store-bought carton of cigarettes.

But as of midnight Saturday, store co-owner Lon Chester told the newspaper, "to be in compliance with the law, we will not be running the large rolling machine."

Pass on passports: The highway bill, however, does have good tax news for another specific group.

The Senate version of the highway bill had authorized the federal government to revoke passports of individuals who owed more than $50,000 in back taxes. That provision was removed from the final bill.

Your site is for sure worth bookmarking.