Few things tick people off like taxes and traffic. So combining the two usually isn't a good idea.

But some states have decided to take that route.

Let's start down the traffic and tax trail in the Peach State.

A one cent regional transportation sales tax increase is on today's ballot in 10 Georgia counties. They are, of course, all around the incredibly congested Atlanta area 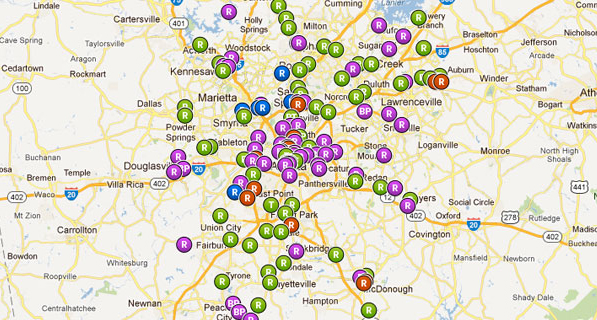 Image courtesy the Untie Atlanta website, which has an interactive map where you can find more about transportation projects that might be paid for if the sales tax increase is approved.

The combined state and county sales tax rates in the proposed higher-tax area now range from 6 percent to 7 percent, with the city of Atlanta tacking on an additional 1 percent sales tax.

Transportation trouble central: Hartsfield-Jackson International Airport has long been known as one of the busiest flight hubs in the country. That reputation extends to the city and the roads to get there.

The 2012 TomTom Congestion Index, compiled by the maker of automobile GPS devices, has ranked Atlanta the nation's 11th most clogged city. The 2010 U.S. Census found that Atlanta had the fourth-worst commute in America, with drivers taking an average of 30 minutes to get to or from work.

For part of my time in Washington, D.C., I worked for a member of Congress (first a Representative, then elected to the Senate) from Hotlanta, so for years I heard about the traffic hassle from my coworkers in the district offices.

The hubby and I almost moved to Atlanta a few years ago and in our reconnaissance of the region, we got a taste of traffic troubles first-hand. One weekend was enough for us to decide that if we did move, we'd get a place in town to avoid as much driving there as possible.

And when the hubby used to fly from West Palm to Atlanta for meetings, his flight that left South Florida at about the same time some of his suburban Atlanta colleagues pulled out of their driveways would get him to the downtown office before the Georgia drivers arrived.

As readers of the ol' blog know by now, we decided instead to head back to Texas.

So I understand why so many residents of Atlanta and its environs are looking for ways to fix the travel troubles.

Supporters of the sales hike say the estimated $8.5 billion raised between 2013 and 2022 will help pay for projects that would benefit the city, state and residents.

There would be more MARTA rail for Atlanta commuters, as well as reversible toll lanes along I-75 and I-575 in Cobb and Cherokee counties. And investments in regional transportation are projected to create and support 200,000 mid- to high-paying jobs, according to the pro-transportation hike contingent.

Arguments against the tax range from the usual complaint that government can't be trusted to manage the tax revenue responsibly to concerns that the bulk of the tax money would go to Atlanta-specific projects to worries that shoppers who come into Georgia for bargains will decide to no longer cross the border.

The vote is expected to be close and every ballot will count. I hope no one gets stuck in traffic on the way to the polls.

California traffic and taxes: Meanwhile, in another place legendary for its traffic jams as well as its battles over taxes, lawmakers are considering taxing drivers.

Yep, I'm talking about the Golden State, home to Los Angeles, number one on the latest TomTom traffic woe list.

This time, though, it's San Francisco that's pushing the tax and traffic buttons. Some there want to tax drivers based on how many miles they drive. For what it's worth, the city that overlooks Alcatraz is number six on the TomTom list this year, up from number nine in 2011.

The Metropolitan Transportation Commission of San Francisco is proposing required installation of GPS units into cars that are registered in the nine-county Bay Area. The vehicle owners then would be charged according to how much they drive, with low-income drivers exempted.

The tax would range from less than a penny to as much as a dime for every mile driven, according to the MSN auto blog Exhaust Notes. Based on current Bay Area driving patterns, the per-mile tax could raise up to $15 million every day.

One of the pros is that it would be a true user tax. Folks who drive the most and therefore contribute more to the need for road repairs and construction would be the biggest payers of the tax.

Plus, say supporters, such a charge might prompt more people to switch to more fuel-efficient cars to offset the additional measured miles driving costs. It also might encourage car pooling.

The downside is, well, where to start?

How about the idea that anyone, government or individual, stalking where I go in my vehicle is beyond creepy.

Yes there might be some viable financial arguments, but, really? GPS? What are we, teenagers with a curfew to get dad's car back in the garage?

Sure, I report my business travel to Uncle Sam on my Schedule C, but I don't have to tell him (unless he audits me) exactly where I went to arrive at that deductible mileage tally.

Uncle Sam floated a per-mile tax last year, and it went nowhere fast. Don't look for the San Francisco proposal to get much traction either.

Even S.F. transportation commission spokesman Randy Rentschler acknowledged that the GPS concept could prove tough even for the notoriously liberal Bay Area residents to accept.