Stop me if you've heard this before. Obama is calling for tax rate hikes on America's higher earners.

Oh wait. Please don't stop me. That would wipe out two-thirds of the ol' blog because Washington has been arguing over tax rates for, well, forever.

In about half an hour, Obama will make his case yet again to keep the current individual income tax rates in place for most taxpayers. But the prez wants to hike the top two rates for the country's highest earners.

This is not new nor is it necessarily news. 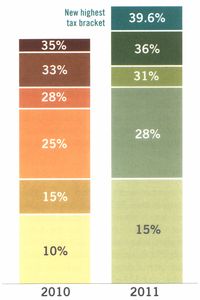 Obama wants the current 10 percent, 15 percent, 25 percent and 28 percent rates, part of the the 2001, 2003 and 2010 deals still known as the Bush tax cuts, to stay in the tax code. If no action is taken, as the graph there to the right (created the last time Congress had this fight) shows the tax rates will be higher for all of us.

Instead, the prez wants folks making more than $250,000 to pay higher tax rates. (For now, Obama appears to be backing off his Buffett Rule plan to tax millionaires. We'll see if he addresses this in the upcoming press conference.)

Obama is doing just what he said he would do two years ago when he reached a deal with Republicans to extend all of the tax rates through 2012. Speaking to disgruntled Democrats as much as to the public, the prez vowed to eventually resume the top taxpayer tax fight:

"I'm as opposed to the high-end tax cuts today as I've been for years. In the long run, we simply can't afford them. And when they expire in two years, I will fight to end them, just as I suspect the Republican Party may fight to end the middle-class tax cuts that I've championed and that they've opposed."

And so we return to the tax battleground.

In advance of Obama's tax hike proposal, Senate Minority Leader Mitch McConnell (R-Ky.) on Sunday's CNN's State of the Union said, "What we ought to be doing is extend the current tax rates for another year with a hard requirement to get through comprehensive tax reform one more time."

Both Obama and McConnell are dreaming or playing election year politics or both.

Yep, same old, same old as we await the possible 2013 fall off the fiscal cliff.

Get ready to hear and read about this until Nov. 6. Then, depending on the presidential election outcome, get ready to read and hear about this after Nov. 6.

Meanwhile, if you want to personally play the "what if?" tax game, Fidelity has an online tax estimator that provides a broad overview of what your tax bill might be if the current rates expire as scheduled.