It looks like members of Congress decided that spending their annual August recess discussing with voters the possibility of a federal government shutdown wouldn't be much fun. 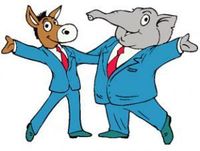 So to make campaigning for their jobs easier, the House and Senate agreed to a funding deal that will keep Uncle Sam operating through March 2013.

President Obama is said to have also signed off on the continuing resolution.

Without the rare bipartisan deal -- rare not only because Republicans and Democrats have found little to see eye-to-eye on and also because they came to the rapprochement months before the deadline -- the U.S. government faced closing up shop on Oct. 1, the beginning of the new fiscal year.

Remember the two near-closures, not to mention the tortuous debt ceiling fight.

The actual vote on the agreement, which will keep funds in line with the $1.047 trillion level for fiscal 2013 set forth in last year's Budget Control Act, won't come until after the House and Senate return to Capitol Hill in September.

The drafting of the deal is still in the works, but is said to be free of controversial riders. We shall see.

Now we just have to wait for what Capitol Hill might do about the fiscal cliff we're inching closer to -- or if you're more dramatic, the arrival of Taxmaggedon or the Taxopolypse -- as the expiration of the Bush tax cuts nears.

Some of the things that must be considered by Dec. 31 are discussed in my story today on Bankrate.com.

When that debate on tax rates, estate tax, payroll tax and more gets started, that's when we'll see exactly how adult and bipartisan both sides really are.