On June 4, 1912, Massachusetts enacted the first minimum wage law in the United States.

The Bay State's wage law was created in response to sweatshops where women and children worked long hours for little compensation.

A handful of states soon implemented their own minimum wage laws, but there was no federal minimum income statute until 1933. That year, as part of the National Industrial Recovery Act, a minimum payment of 25 cents per hour for employees was established.

Two years later, the Supreme Court, as it had done in connection to various state minimum wage laws, declared the federal act unconstitutional and the minimum wage was abolished.

Seventy-four years later the federal minimum wage is $7.25 an hour. It's been at that level since 2009.

However, younger workers can be paid less ($4.25) for a while after they are hired.

And in industries where workers customarily receive tips from customers, employers are allowed to pay staff just $2.13 an hour. Remember that at tip time when your restaurant server did a good job.

Overall, the top federal minimum wage has gone up, using 2012 dollars, on average less than a nickel a year since it was created.

And you thought your boss was tightfisted when you asked for a raise!

State minimum wage rules: In addition to the federal minimum wage, states have the option of setting their own lowest possible pay standard.

The U.S. Department of Labor's color-coded map below offers a vivid display of which states pay what as of Jan. 1. 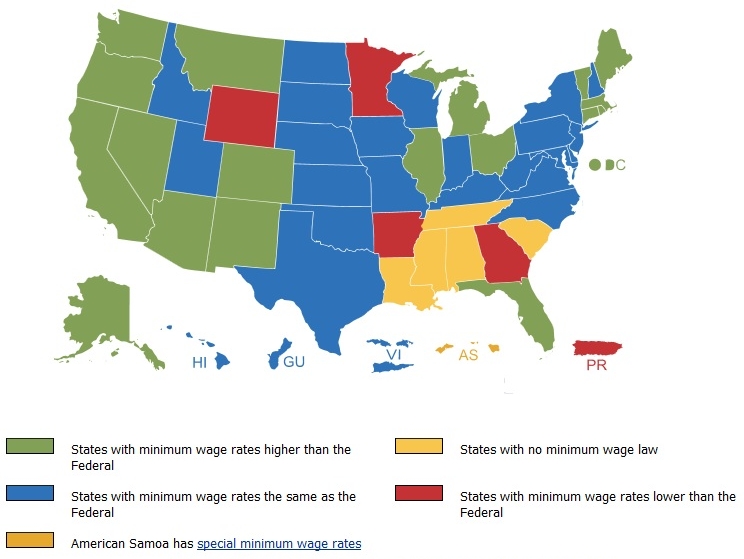 Most states -- 23 plus Guam and the Virgin Islands -- set their minimum wage at the same level as the federal pay standard.

Five states have opted not to set a minimum wage. They are Alabama, Louisiana, Mississippi, South Carolina and Tennessee.

Four states and Puerto Rico have minimum wage levels that are lower than the federal amount.

Eighteen states and Washington, D.C., have a minimum wage that is more than $7.25.

A contentious issue: Since its origin 100 years ago, the minimum wage has been a contentious economic and political issue.

Key arguments by those who want the minimum wage abolished include:

Supporters of a minimum wage argue that it is necessary to provide workers with an income that allows them to survive and pay the bills.

Without it, say minimum wage advocates, companies could hire less skilled, usually younger, individuals who have less financial commitments and therefore will work for less money.

Tax help for lower-paid workers: When jobs are scarce, many folks will take any work just to get some money coming in.

In these cases, they also might be eligible for some help from the U.S. tax code.

In extreme cases, workers might not even have to file a tax return. An individual's filing requirement depends on age, filing status and income. Generally, once you make a certain amount of money, you must file a federal tax return.

You can find the earnings amount, which usually is adjusted each year for inflation, that triggers a return requirement in the Form 1040, 1040A or 1040EZ instructions. Or you can use the IRS' Interactive Tax Assistant to see if you must file a federal tax return.

Remember, however, that even if you're not required to file a 1040, it might be worthwhile to do so.

This is the case if you had too much tax withheld from your pay. You can get that back as a refund only by sending the IRS your forms.

Examine the EITC: You also might be eligible to claim the Earned Income Tax Credit, or EITC.

This tax break, created to help lower income workers recover some of their tax payments so that they'll have more to live on, is controversial.

The biggest complaint by critics is that the tax credit is refundable. That means that even if you don't owe the IRS anything, you can get a tax refund via the EITC.

And although you must work to claim it, there is a sweet spot -- it's different for filers depending on filing status and whether the individual has any dependent children -- at which you'll get the maximum EITC amount.

Earn more than that and you'll get less or no EITC money. That, say critics, encourages many people to work less or to fraudulently file EITC claims.

You can see if you qualify for the EITC by using another IRS eligibility tool, the EITC Assistant.

I agree that it's a flawed system. Many folks say social policy shouldn't be administered by the tax code.

But the IRS has instituted tougher rules to help stem EITC cheating.

And the tax credit is one of the few safety nets we have for the working poor.

I suspect that in this political and budget-cutting climate, if we killed the EITC those who truly need and are eligible for the tax credit would be flat out of luck.

And pushing thousands of folks into even direr financial straits definitely is not a good thing for any of us.