Thursday, May 31, was World No Tobacco Day. Yeah, it slipped right past me, too.

And while it looks like few folks here in the United States marked the 25th anniversary of the global no-smoking day, some lawmakers and lobbyists were at work -- and odds -- over cigarette taxes in several states.

The battle that's getting most of the attention is in California. Golden State lawmakers and health advocates are pushing a new cigarette tax of $1 per pack. If enacted, it would make the state's total excise tax on a pack of smokes $1.87, as well as raise levies on other tobacco products.

Voting on the vice's tax cost: The tax, which will appear as Proposition 29 on Californians' ballots next Tuesday, June 5, is estimated to raise as much as $850 million a year. Most of that new tax money would go towards cancer research.

They seem to have public support heading into Tuesday's election. A recent poll found that 62 percent of the state's voters back the tobacco tax increase.

But the tax hike is facing a strong and well-financed tobacco lobby. Although a possible $1.87 per pack would be just the 16th highest tax rate in the country, tobacco growers and those who make products from their harvests don't want any tax increase in the United States' largest cigarette market.

The colors in the American Lung Foundation's cigarette tax map provide a vibrant image of where the various states' cigarette taxes rank. 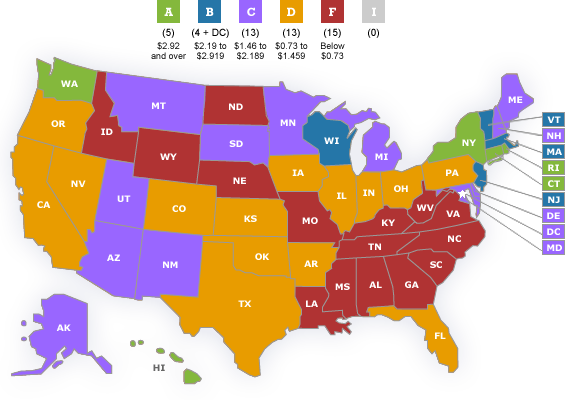 The states in green have the higher tax rates. The ones in red collect smaller cigarette taxes.

The Illinois legislature last week approved a $1 per pack tax increase. That will more than double the Prairie State's current 98 cents per pack cigarette tax.

The increase, which is expected to bring in $700 million a year, will take effect as soon as Gov. Pat Quinn signs the bill, which he has pledged to do as a way to pay for Illinois' Medicaid program.

Gov. Lincoln Chafee has proposed a four-cents per pack increase in Rhode Island's cigarette tax. That hike would push the Ocean State's cigarette tax, already one of the highest in the country, to $3.50 per pack.

The tax was included in the state's legislative budget. It's projected to bring in an added $4 million a year to the Rhode Island treasury.

Do taxes snuff out smoking? Higher cigarette taxes are a powerful tool to fight tobacco use, says the American Lung Association (ALA). Cigarette taxes encourage current smokers to quit, says the nonprofit, and are particularly effective in preventing kids from starting to smoke.

The larger the increase, the bigger the impact, says the ALA. Every 10 percent increase in the price of cigarettes reduces the amount children smoke by about 7 percent.

The Centers for Disease Control and Prevention (CDCP), however, says those taxes aren't being used properly.

Tobacco taxes and legal settlements have raked billions of dollars for states around the country according to a new study from the CDCP, but over the past decade, only about 3 percent of that money has been spent funding tobacco prevention programs.

That's what would happen to California's new tobacco tax money. It would go primarily to research, not to smoking prevention or cessation efforts.

Such diversions of tobacco tax money makes it tougher to reduce deaths and diseases caused by tobacco use, said the CDCP analysis, published in the May 24 issue of Morbidity and Mortality Weekly Report.

Between 1998 and 2010, states have collected nearly $244 billion in cigarette taxes and settlement money, compared with only $8.1 billion earmarked for state tobacco control efforts.

Budget deficits also pose problems for tobacco tax collectors. Instead of earmarking the funds for research or education, states are taking the money to pay for other government programs.

Border bargain buyers: The desire of smokers to get a bargain with their nicotine fixes obviously was on the mind of Rhode Island state Rep. Robert Phillips.

He suggested that instead of a cigarette tax increase, the state's tax be cut by a $1 a pack, to $2.46, to encourage Massachusetts smokers to cross the border into R.I. and stock up on lower-tax smokes.

That way, argued Phillips, the tax cut would make up in volume sales the money lost by dropping the cigarette tax rate. His proposal didn't make it out of committee.

Similar border price differences also concerned Illinois lawmakers who opposed that state's cigarette tax hike. Illinois' nearly $2 per pack tax will likely mean a lot of the state's smokers will cross into Missouri with its 17 cents per pack cigarette tax.

Black market sales: Then there's the cigarette black market, which pops up for smokers not close to lower tobacco tax states. In these cases, smugglers move cigarettes from states with low tobacco taxes into those with higher ones.

New Zealand law enforcement will probably be on the lookout for illicit cross-border tobacco operations now that the country's leaders have decided to on a 40 percent hike in tobacco taxes over the next four years.

Corrected because Indiana is not the Hoosier State,
but next door to Indiana.