The many ways a refund can go astray

Every year there seems to be a new tax refund horror story.

The big one in 2011 was mass delays in processing returns of folks paying back the first-time homebuyer tax credit.

There have been some occasional hold-ups on such returns this filing season, but it seems that the Internal Revenue Service's streamlined payback process and changes to the 1040 (enter the payback amount directly on the return and no attachment necessary) have solved a lot of problems, for the IRS and taxpayers.

The 2012 filing/refund headache involves Uncle Sam's effort to cut down on tax identity theft and fraud. A new computer protocol slowed things down, especially early in the year when folks eager for tax refunds file in droves.

Paper or direct deposit confusion: I suspect this new tax fraud screening played a part in a refund snafu query I got today.

Seems Jane (not her real name; like the IRS, the ol' blog is committed to your privacy) and her husband whom we'll call Jeff filed a joint return.

Jane filled out their taxes, the first time they've filed jointly, and listed her name first because they agreed that their refund should go directly into a bank account on which she is the primary owner. Jeff is joint owner, but she and her Social Security info are listed first. 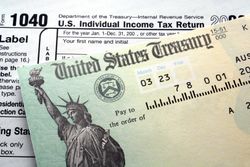 After weeks of waiting, a paper check showed up at their house. And it was addressed to Jeff alone.

So, asked Jane, what's the deal?

There are several possibilities.

Name factors: First, when Jane filled out their 1040 and listed her name first, she entered Jane Smith (Jeff's fake last name). But when she alerted the Social Security Administration that she was changing her name after marriage, she told that office to send her a new card showing Jane Jones (her fake maiden name) Smith.

I suspect that when the IRS screening program saw a last name for Jane that didn't jibe with the agency's or Social Security Administration's records, the IRS computer determined that there was a possibility an identity thief trying to steal Jeff's tax money.

So the IRS pulled it.

And upon finding that Jeff's name, tax ID and address on the return matched up with what was in IRS records, the agency sent him the refund via paper check to keep it out of a possible criminal's hands.

Bank account numbers: There also could have been an issue with the couple's bank account routing number.

The IRS provides in the Form 1040 instructions a graphic example to help filers find theses numbers:

But as direct deposit has become more common, banks and financial institutions have adjusted financial transit numbers. I know that at our bank, the routing number on our checks (yes, we still use them from time to time) is no longer the one used for direct deposits.

So despite that drawing, the IRS points out in the 1040 instructions that you should ask your financial institution for the correct routing number if:

It's possible that Jane and Jeff's bank found routing number discrepancies with the IRS attempt to directly deposit their refund.

When that happens, the bank rejects the deposit and then the IRS issues the refund as a paper check, sending it to the taxpayer's last known address it has on file.

So rather than thinking that the IRS is just a sexist agency, I'm going with the explanation that a combination of fraud filters and routing number issues produced the paper refund check payable to just Jeff.

What if your refund is wrong? I am happy to report that at least Jane's and Jeff's tax refund amount was correct.

But what if your federal tax refund, regardless of how it is delivered, is not the amount that you expected? Our latest Weekly Tax Tip looks at what to do if your refund is wrong.

Common reasons for differences in refund amounts, both greater and smaller than you thought you were getting, include:

Hold or cash? If the wrong refund is less than you expected, you should be OK spending (or saving) it.

Once things are explained or resolved and you're due more, the IRS will just send the extra money to you.

If, however, you got a much larger refund than you expected, I suggest holding it until you get some clarification.

This happened to the hubby and me one year. The IRS was right. I used the wrong tax table when computing our tax bill (a pre-software filing) and shorted us of a sizable refund. Thank goodness IRS return processors caught it.

That unexpectedly large Treasury check freaked me out. I was afraid to even deposit it in case the IRS wanted the actual payment instrument back.

But as soon as they explained how I screwed up and that were indeed due that much money, I cashed that sucker!

If there was a flat tax, there would be no IRS, no fraud, no loopholes and no problems.