Do you travel to other states to do your job? Then you probably know the hassle of figuring out the different state income tax filing requirements.

It's often called a jock tax because the taxing practice got a lot of attention by collecting from high-paid athletes and entertainers who play and perform at venues nationwide. But the multiple state tax liability issue applies to all traveling workers.

The Mobile Workforce State Income Tax Simplification Act of 2011, H.R. 1864, seeks to make things easier for all such workers and their employers.

The bill, introduced by Reps. Howard Coble (R-N.C.) and Hank Johnson (D-Ga.), would prohibit states from imposing income taxes on traveling workers unless they spend at least 30 days in the taxing jurisdiction.

The bill also would establish a uniform national standard governing the withholding of state income taxes for nonresident employees.

Professional athletes, entertainers and some public figures, however, would be excluded from the legislation.

A look at the map below, created for a report by the Council On State Taxation for the Multistate Tax Commission Income and Franchise Tax Uniformity Subcommittee, shows the different traveler taxing regimes by state. 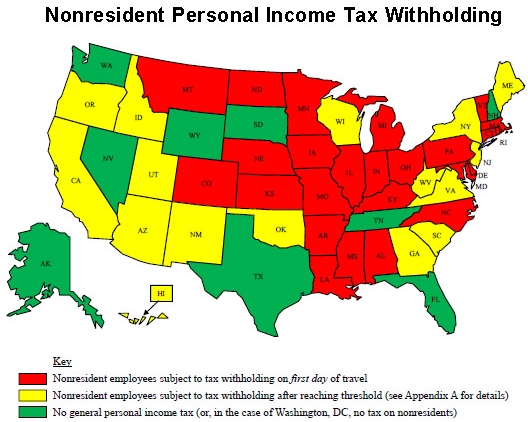 A larger version of the map is found on page 7
of the Council on State Taxation report (PDF).

"The diversity of state income tax laws places a significant burden on people who travel for work and their employers, many of which are small businesses," Coble told Accounting Today. "Currently, 41 states tax the wages earned by a nonresident for work performed there. I do not take issue with the right of those states to impose an income tax, but I am concerned that the disparity of tax rules among those states is hurting small businesses and stifling economic growth."

Coble noted that some states require a nonresident to pay income tax if he or she works in that state for just one day -- those are the states in red on the map -- while others don't collect tax until the nonresident works for a certain number of days in the jurisdiction.

"Small businesses must expend considerable resources just to figure out how much they must withhold for their traveling employees in 41 different jurisdictions," said Coble. "Employees are also confused about when their tax liability is triggered and in which states they must file a tax return."

Although some states allow workers to claim a tax credit for income that is taxed by other states to which they travel for work, this just shifts money around the country, says the Tax Foundation, toward states with the most aggressive rules. The Washington, D.C.-based group says it has been hearing more and more stories about state tax departments auditing travel records.

Coble noted that still states would be able to set any income tax rate they choose, but his bill would nevertheless provide tax simplification.

The mobile workforce tax measure had wide bipartisan support in the House, hence the voice vote. Many tax, tax professional and industry groups, including the National Taxpayers Union, the National Association of Manufacturers and the American Institute of CPAs, also are lobbying for its enactment.

So far, there is no companion bill in Senate. But look for supporters of the measure, energized by the House approval, to push for introduction and quick consideration of a mobile workforce bill version on that side of Capitol Hill.