Payroll tax cut money not always used as planned, by taxpayers or lawmakers

When Congress was debating whether to extend the 2 percent payroll tax cut, one of the key arguments for keeping the rate at 4.2 percent through 2012 was that the extra money would help the country's economic recovery.

That, of course, presumed that we'd all take the extra money -- estimated to be about $1,000 a year for a family earning the annual median income of slightly more than $50,000 -- and pump it back into the economy.

So how's that working out?

So-so, based on data collected by Liberty Street Economics, the blog by economists working at the Federal Reserve Bank of New York.

Intent vs. action: Basit Zafar, Grant Graziani and Wilbert van der Klaauw conducted two surveys last year in which they asked people what they intended to do with any extra funds from the payroll tax cut.

The first survey was in February 2011. Back then, shortly after the payroll tax cut began showing up in paychecks, almost 9 percent of those surveyed said they would spend most of the tax-cut funds.

Nearly 40 percent planned to save most of the payroll tax cut money.

And just over 50 percent planned to use a majority of the payroll tax cut funds to pay off debt.

OK. Everyone says they want to save more. But did we?

Or did we consumers do what pro-payroll tax reduction advocates wanted and spend, spend, spend to help jump-start the sluggish economy?

To find out, in December 2011 the Fed economists asked how people had used their extra tax-cut funds over the past year.

Guess what? We don't always do what we say we'll do when it comes to money.

In the follow-up survey, 35 percent of individuals actually spent the majority of their tax-cut funds, a sharp increase from the intended use of 8.8 percent.

As for saving or paying off debt, the table below shows that folks didn't follow through as they originally planned.

Intended and Actual Use in 2011 of Payroll Tax Cut Funds

Essentially, noted the economists, "there is a systematic shift toward spending for those who did not use their funds in the way they intended; that is, individuals ended up spending more of their tax-cut funds than they had intended."

So the payroll tax cut did do some of what its advocates predicted, increase spending both intended and otherwise.

But two-thirds of us socked away the extra bucks or paid off existing debts.

On the demographic front, they found that those with annual incomes of more than $75,000 tended to spend a slightly larger fraction of the payroll tax cut than did lower-income respondents. 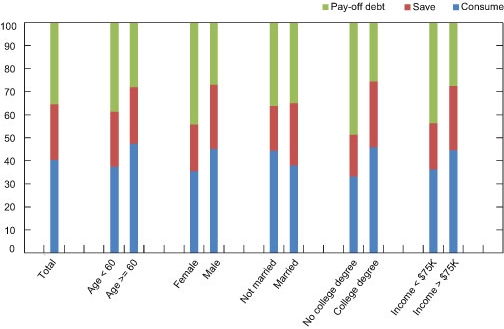 Lower income earners also tended to save less and to pay off debt more than higher-income respondents.

The New York Fed economists note that earlier studies of tax break windfalls, specifically the 2001 and 2008 tax rebates, did find that lower-income households spent a higher fraction of those funds.

However, economic and tax times are different. The blogging economists noted:

"Data collected from other surveys we conducted indicate that lower-income households, relative to higher-income households, experienced more credit tightening (they had significantly more involuntary credit card closures over the 2008-10 period), had greater nonmortgage debt during 2010 (median nonmortgage debt-to-income ratio of 16.7 percent compared with 8.2 percent), and perceived greater employment uncertainty during 2010. These results suggest that lower-income households are closer to the margin of being delinquent and further credit-constrained, and hence it should not be surprising that — despite being more liquidity constrained — they are no more likely to spend their tax-cut funds than higher-income households. The higher debt and tighter credit availability for the lower-income respondents also explain why they use more of their funds to pay off debt than the higher-income group (42.8 percent compared with 27.9 percent)."

And contrary to the usual gender stereotype, when it comes to the payroll tax cut the data show that men tend to spend more than women.

Women also use far more of their tax-cut funds to pay off debt than men do.

Design matters: Finally, based on the economists' findings, tax break creators need to pay attention to the way they set up the benefit. That matters in achieving, or not, the intended goal.

When people perceive tax cuts to be more permanent, they plan to spend more of their funds. Apparently, if we know the tax-break money will keep coming, we feel freer to dispose of it since more is on the way.

Think about that, Congress, as you go through your regular contortions when it comes to dealing with the continually-expiring tax extenders.