As the April filing deadline neared, I asked did a crook file your taxes?

For many folks in Florida, the answer apparently is "yes."

With nothing more than ledgers of stolen identity information — Social Security numbers and their corresponding names and birth dates — criminals have electronically filed thousands of false tax returns with made-up incomes and withholding information and have received hundreds of millions of dollars in wrongful refunds, law enforcement officials say.

The criminals, some of them former drug dealers, outwit the Internal Revenue Service by filing a return before the legitimate taxpayer files. Then the criminals receive the refund, sometimes by check but more often though a convenient but hard-to-trace prepaid debit card.

The result? We all end up paying because in some cases the IRS issues two refunds.

The first refund goes to the criminal who filed a fraudulent tax return.

Then, usually many months later, the legitimate taxpayer whose identity was stolen finally gets his or her IRS refund money.

Florida law enforcement officers, who are dealing with the highest rate of identity theft in the nation, told the newspaper that they regularly encounter corner drug dealers and robbers who have been in and out of prison for years now making lots of money by filing fraudulent returns, enough so that they can afford to buy Bentleys and Lamborghinis.

The IRS is working with Florida, allowing police to get privacy protected information on tax returns as long as the rightful taxpayer agrees.

No, there's not more money in the IRS budget to fight taxpayer fraud.

But this spring, the Senate Finance Subcommittee on Fiscal Responsibility, chaired by Florida Democratic Sen. Bill Nelson, did hear from the IRS, National Taxpayer Advocate, Department of Justice and Florida law enforcement officers on the growing tax fraud ID problem. 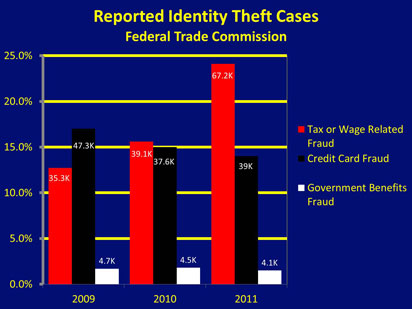 The hearing was in connection with S. 1534, introduced by Nelson, that would help victims get their money more quickly in the event their refunds are stolen.

Nelson's bill also would increase protections for victims, help secure some Social Security numbers and expand the Florida pilot program to make it easier for federal and local law enforcement agencies to work together.

Will these measures, if enacted, help? Sure. Every step taken to limit tax ID theft and prosecute those committing this costly crime is good.

Taxpayer tax ID prevention tips: But what can we taxpayers do to protect ourselves from fraudulent 1040s filed in our names?

The easiest move is to file your tax return early in the filing season. That way you can make sure you get your rightful money before a criminal even tries to convince Uncle Sam that he or she is you.

The IRS also has a special Web page with tips on protecting your tax identity, including avoiding email phishing scams designed to get you to reveal tax and personal financial data.

We'll also probably have to reconcile ourselves to somewhat slower tax return processing, at least for a while.

The 2012 filing season was frustrating for many taxpayers who saw their tax refunds delayed as the IRS fine tuned its efforts to detect tax fraud.

Sure, it's no fun to wait for your tax money. You might want to consider adjusting your withholding now so you don't have to wait for a refund next year.

But a delay is much better if it ensures that you and everyone else gets what they're due rather than crooks illegally claiming your tax refund.

STOP IT, just STOP IT. Why does government drown us in acronyms?