Estate and inheritance tax issues simmering on legislative back burner

You can learn a lot about your neighbors just by walking around the area.

Take the kids who live seven doors down from us. Their driveway chalk art prompted a speculative haiku:

Hopscotch? Much too tame.
These kids are C.S.I. fans
or quite macabre. 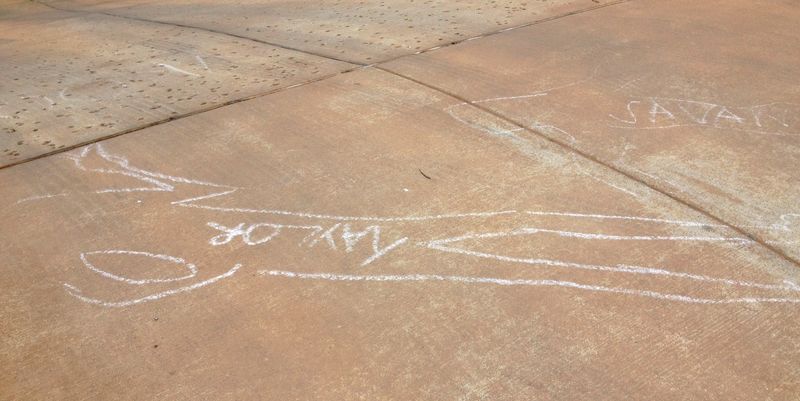 OK, maybe it's me who's the television crime show aficionado. I'm sure (hope!) the children had much less ominous reasons for drawing chalk outlines of themselves.

But the line artistry also got me thinking about that inevitable meeting of death and taxes. Yeah, that kind of A to B to taxes thinking tends to happen in what passes for the real life of a tax geek.

2012 estate tax amounts: As I'm sure you remember, thanks to Congressional infighting and ineptitude the federal estate tax expired in 2010.

The House and Senate were able to get their acts together just enough to grudgingly agree on an estate tax resurrection for 2011 through 2012 along with a whole slew of other tax laws.

Estates valued up to $5.12 million (thanks to an inflation adjustment) are not subject to the tax. If the total assets exceed that amount, the tax rate is 35 percent.

The estate tax extension also increased the lifetime gift-tax exemption from $1 million to $5.12 million per individual in 2012 inflation-adjusted dollars ($10.24 million this year from the previous $2 million for married couples).

And speaking of couples, there's also a nice portability provision in effect. During 2012, if one spouse dies without using up his or her federal estate tax exemption, the unused portion may be transferred to the surviving spouse.

Impending 2013 changes: But all this will change unless Congress deals with the estate tax, along with the ordinary income tax rates and investment tax rates that are getting much more attention in this presidential election year.

Without Capitol Hill action and presidential signature, on Jan. 1, 2013, the lowest 10 percent individual income tax rate could disappear and the top personal tax rate could go to 39.6 percent.

As for investments, the 15 percent long-term capital gains and qualified dividend rate would go back to 20 percent and the zero tax rate for lower income investors would return to 10 percent.

And on that first day of January 2013, the estate tax laws also would change for the worse for decedents and heirs.

The estate exclusion amount then would revert to $1 million and the tax rate of estates in excess of that would jump to 55 percent.

With an estate tax, the assets left after death are taxed. An inheritance tax, on the other hand, is collected from the heirs based on what they receive. 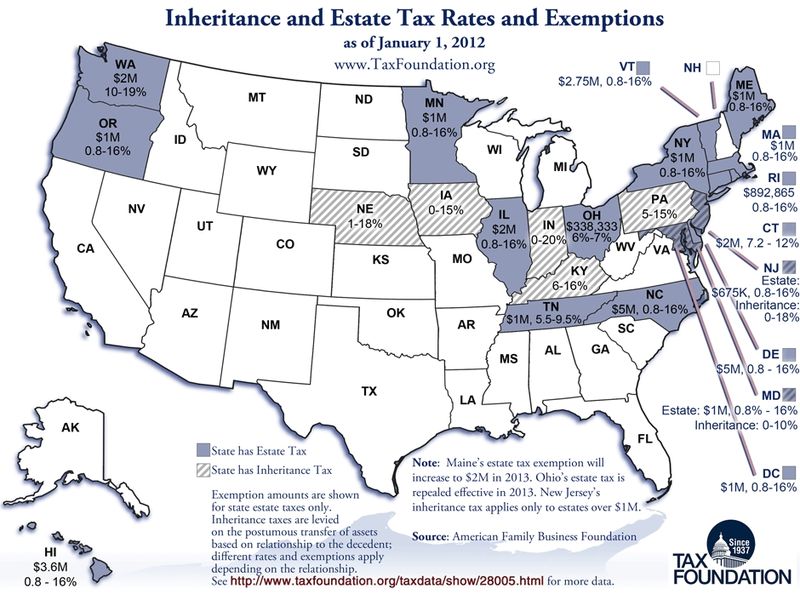 Click the map for a larger view.
Info also is in table format at the Tax Foundation.

Estate, heir issues at "Downton:" Estate and inheritance laws have gotten some popular culture spotlight thanks to the British television series, aired here across the pond as part of PBS' Masterpiece Classics, "Downton Abbey."

Leiha Macauley, a trust and estate administration attorney and partner in the Boston office of Day Pitney LLP, writes in The Boston Globe that the travails of Lord Grantham and his extended family have made her a rock star.

"Not quite the cocktail-party cachet of, say, a CEO with a hot start-up heading for an IPO, or even of a ticketholder to the next Yo-Yo Ma concert. Instead I’m getting button-holed in social settings simply because I can explain details of a seminal storyline of the smash BBC hit," says the estate tax lawyer.

I'll leave it to Mccauley to elaborate on the "Downton Abby" entail, or fee tail as it also is called, and its central role in the fictional Crawley family because of its lack of an immediate male heir to whom the estate could pass.

I'm just going to be thankful that the popularity of recent TV shows and movies (remember George Clooney's estate issues in "The Descendants") have made being a tax geek a bit more acceptable and fun.