That rate has been in effect since 2007. But unless Congress agrees to extend it, the cost of college loans will go back to a 6.8 percent interest rate on July 1.

One presidential stop on his Stafford loan rate tour was the University of North Carolina at Chapel Hill. Jimmy Fallon, host of NBC's Late Night program, also was at that campus.

And Fallon convinced the POTUS, an acronym the television comic mangled for effect, to slow jam the news about the possible rate hike on the federal college loans. 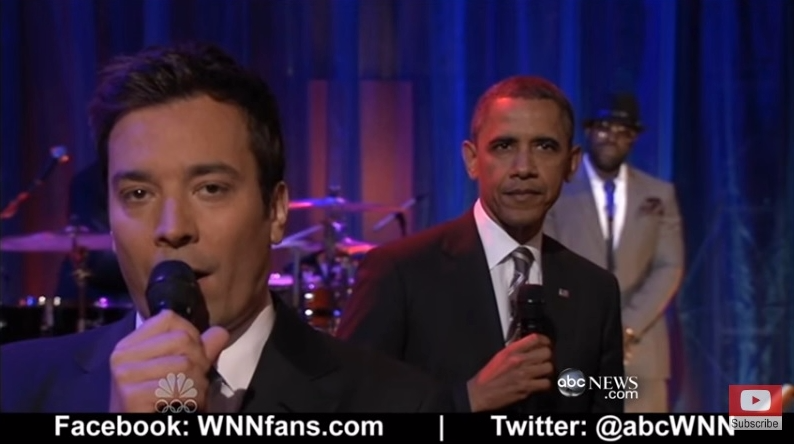 Click image to see ABC News report with clip of Obama slow jam with Fallon and The Roots.

Whatever else you think about the student loan rate issue or Obama, you can't deny that the man is a master of keeping a straight face while being called Preezy of the United Steezy.

Rate change for new loans only: The loan rate increase would affect around 7 million undergraduates.

The White House says the average increase in monthly payments at the higher rate would be around $1,000.

But despite implications or inferences, any rate increase would not affect Stafford loans already in place. The 6.8 percent rate would apply to loans issued July 1 or later.

And although the arguments for keeping the lower rate might have you thinking that students are paying these loans at the same time they are hitting the books, that's not the case.

Repayment doesn't start until the student graduates, leaves school or drops below half-time enrollment. Only when one of those triggers kicks in does repayment begin. And even then, the loan recipient gets a six-month grace period before making payments.

Loan rate agreement, disagreement: Still, it's an issue that resonates with cash-strapped students and their parents.

That's why both Obama and his Republican challenger for the White House, Mitt Romney, support maintaining the lower rate for Stafford loans.

So do most Representatives and Senators.

The problem, however, is the same one Congress has been dealing with for years -- how to pay for  benefits.

House Republican leadership proposes extending the 3.4 percent rate for a year. To cover the $6 billion cost, GOP Representatives want to take money from the Prevention and Public Health Fund, a program under the health care law.

On the Senate side, Democrats want to pay for the lower loan rate extension by preventing some business owners from sheltering their income Medicare and Social Security taxes.

Senate Republicans agree with their House counterparts and want to pay for the loan program rate by taking money from Obama's health care program.

Will they eventually agree on a way to keep the student loan rate at 3.4 percent? Yes.

Will they milk it for all it's worth politically before then? Yes.

Deducting student loan interest: Whatever the interest rate, folks paying off student loans can deduct up to $2,500 of the interest they pay as an adjustment to their income on their 1040 or 1040A tax returns.

Also known as an above-the-line deduction, this tax break is available even if you don't itemize. If you do itemize, you still can claim the student loan interest directly on your 1040.

You can deduct interest on student loans issued for yourself, for your jointly-filing spouse and for your dependents as long as the money was used for qualified undergraduate or graduate school expenses. That's basically tuition, fees, room and board, books and supplies, and other necessary expenses, such as transportation.

The deduction is phased out if you make over a certain amount. If you got a filing extension or are amending your return, the income limits for the 2011 tax year are modified adjusted gross income between $60,000 and $75,000 for single, head of household, or qualifying widow or widower filers and between $120,000 and $150,000 for married couples filing jointly.

Once you make more than the income range for your status, you can't claim the student loan interest deduction.

Right now, all interest on qualifying student loans can be counted toward the deduction, taking into account, of course, all the other requirements and dollar limits.

But unless Congress acts, in 2013 student loan interest will be deductible only for the first five years (60 months) of repayment.

Amazing news you have provide for many people to gain benefit from your advice. I find your suggestions very amusing and consider them helpful. Thanks for sharing. Hope to learned more interesting information from your site.

This is a very helpful breakdown of loan interest deductions. I recently wrote an article about paying off school loans while still in school (http://www.topschoolinc.com/college-loans-paid-off-before-graduating.aspx), but I didn't add much about managing payments after graduating. Great stuff!