If last year was the first one in which you worked for yourself, either as your full-time job or by doing some freelance work on the side to supplement your wages, you are likely to encounter a big tax surprise when you file: self-employment tax. 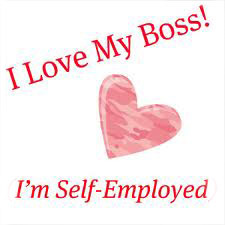 The SE tax goes toward Social Security and Medicare, similar to those tax amounts that employees see withheld from their working-for-the-man paychecks. In both SE and withholding situations, the tax is credited to your Social Security account to help determine how much money you'll eventually get from that federal retirement plan.

Do you owe SE? To determine whether you're subject to self-employment tax, you first must figure your net profit or net loss from your business.

Sole proprietors or independent contractors will calculate their earnings on Schedule C or C-EZ.

If your business is successful, your profit on Schedule C becomes part of your gross income reported on page 1 of your Form 1040.

And if your net self-employment earnings were $400 or more, then you've also got to pay SE tax and file Schedule SE with your tax return.

The payroll tax holiday, however, cut the tax rate to 13.3 percent -- 10.4 percent goes toward Social Security tax and 2.9 percent to Medicare.

This lower rate also is in effect for the 2012 tax year.

But only -- and I resisted the strong urge to put quotation marks around the word only -- the first $106,800 of your earnings in 2011 is subject to the 10.4 percent Social Security portion of the SE tax.

This earnings limit also applies to workers who get paychecks and have the Social Security, or FICA, tax withheld by their employers.

The 2.9 percent Medicare portion, however, is-not subject to an earnings limit. All that you make, whether self employed or working for wages, is subject to this tax.

Paying both parts: Now for some bad and some good self-employment tax news.

First, the bad. As a self-employed taxpayer you pay both the employer and employee portion of the SE tax. I know, bummer.

Again, this process follows that of standard employees and employers. The worker pays half of the payroll tax via withholding and the boss matches that amount.

The payroll tax holiday has altered this calculation a tad. Of the total 10.4 percent tax that goes toward Social Security, employees now pay just 4.2 percent. Employers, however, still must put in 6.2 percent of a worker's earnings.

Since you're both the worker and the boss, you must make both tax payments.

Now the good SE news. You get to deduct the employer portion of the SE tax on your tax return.

It's part of the adjustments to income, also known as above-the-line deductions, that are listed in the last section on page 1 of Form 1040.

It's not fun paying extra tax. But at least you're doing so because now you are the boss.