Tax costs of a gallon of gasoline

Americans are not happy about gasoline prices and they want the President and Congress to do something about it. Now. Before they hit the highways for summer vacations.

Good luck with that, drivers.

A new poll by Gallup found that a majority of both Republicans and Democrats said they believe elected officials can "do things to keep price of gas from rising."

Fuel prices have become part of 2012's campaign rhetoric, with Republicans demanding White House approval of the Keystone XL pipeline. Obama has dismissed the idea that any president running for reelection would want gas prices to go up and has again called for support of alternative fuel programs.

At least some of the poll respondents have a firmer grasp of reality. Thirty-one percent surveyed said they believe the rising price of gas is "largely beyond" the control of elected officials.

"We'll continue to see plenty of blame attributed to both parties if we see prices go higher," says Tom Kloza, chief analyst for the Oil Price Information Service. "But there is very little a president can do to impact gas or crude oil prices over the short term."

The pump price of gas taxes: Taxes play a part in what we pay when we fill up our vehicles.

The American Petroleum Institute's January survey found that the nationwide average tax on gasoline of 48.8 cents per gallon (cpg) was unchanged from its October 2011 study.

The state tax rates shown in the API map below reflect include the federal gasoline excise tax of 18.4 cents per gallon. 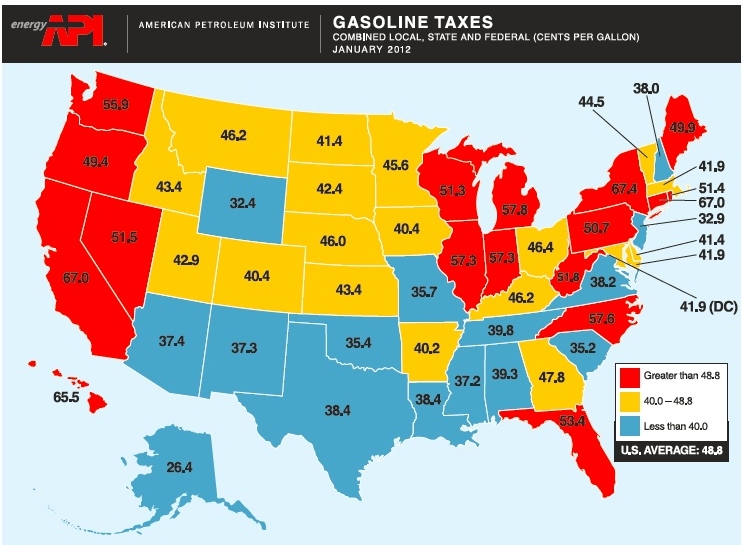 Other taxes (such as applicable sales taxes, gross receipts taxes, oil inspection fees, county and local taxes, underground storage tank fees and other miscellaneous environmental fees) accounted for 9.5 cpg, down 0.1 cpg from last fall. Adding these state taxes and fees to the state excise taxes results in a volume-weighted average state and local tax of 30.4 cents per gallon.

However, the state excise tax on gas in the Empire State was relatively low, only 8.1 cpg. The biggest New York tax chunk was for other fuel taxes.

API says New York's petroleum business tax was raised from 17.0 cpg to 17.8 cpg for gasoline at the start of 2012. The state also imposes an 8 cpg motor and diesel fuel excise motor fuel tax, with an additional .05 cents per gallon petroleum testing fee on gasoline only. Other taxes include various mass transit district taxes, as well as local county sales taxes.

The highest state gas excise tax is collected by North Carolina. Yeah, I was surprised, too. The Tar Heel State's motor fuels tax went from 35 cents per gallon to 38.9 cpg on Jan. 1. That rate is in effect through June 30.

The cheapest gas taxes were levied in, no surprise, Alaska. The Last Frontier only collects the federal gas tax and a state excise tax of 8 cents per gallon.