How you can help tornado victims

Tornado season 2012 has begun and it is not good.

Weather Channel storm expert Dr. Greg Forbes says that the March 2-3, 2012, twister outbreak has the potential to be the largest on record for the month of March. The existing record is 74 tornado strikes March 11-13, 2006.

Through Saturday, March 3, there were more than 100 tornado reports. 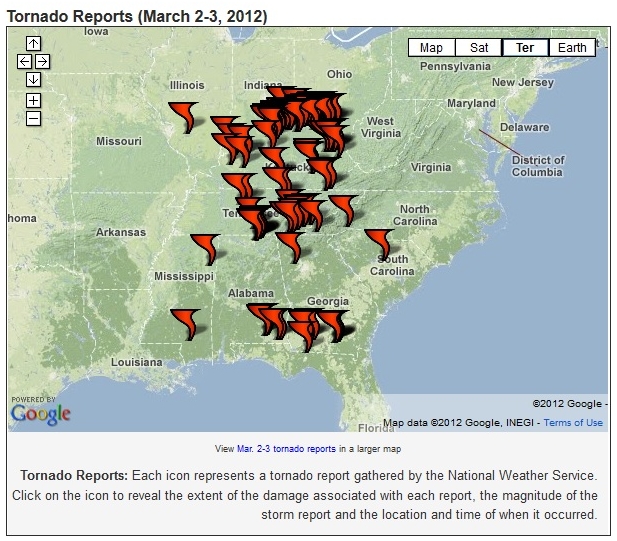 Click image to go to the Weather Channel's interactive version.

The official number of tornadoes is likely to be smaller as some storm reports will be consolidated.

But regardless of the final count, the deadly early March 2012 storms were horrific.

And as is always the case in the wake of natural disasters, several groups are reaching out to help storm victims.

American Red Cross relief efforts are in place in 11 Southern and Midwestern states hit by the tornado outbreaks.

Old-school contributions also are welcome. You can send a check to your local Red Cross chapter or to the American Red Cross, P.O. Box 37243, Washington, D.C. 20013.

The quickest way to support these efforts is to donate online.

You also can make a $10 donation to the Salvation Army by texting STORM to 80888. To confirm your gift, respond with the word "Yes."

Catholic Charities is accepting online donations for tornado victims at its website. If you prefer the phone, donate by calling 1-800-919-9338.

Also check with your local place of worship and community groups. Many mobilize to help those dealing with catastrophes.

And remember that if you do give, your generosity could be a tax deduction on your 2012 tax return. I know that's not why you are helping out, but if you itemize you should claim the charitable giving tax break.