Home Table of Contents Tax Tips Credits Deductions Refunds State Taxes Politics/Laws Tax Terms Archives
Tax moves to make in February 2012
How do you plan to deal with your taxes?

Mitt Romney needs to follow the advice that the hubby is always giving me: Think it. Then say it.

Of course, that's my more circumspect better half's way of encouraging me to keep most of my immediate thoughts entirely to myself.

So I know how the GOP presidential candidate feels. I'm sure he definitely wishes he could take back a line from a televised interview this week.

The phrase that's dominated the airwaves, print publications and the Internet makes Romney seem, shall we say, a bit distant from those who aren't as well-off as he:

"I'm not concerned about the very poor."

In all fairness, that stand-alone line is out of context. Romney's complete reply to a question from CNN's Soledad O'Brien was:

There's still plenty of room for debate about a safety net for our neediest citizens. I'm not going to get into that here.

But since this is a tax blog, I do want to take this opportunity to note that the tax code is woven into that net. Many tax breaks are created especially for and/or limited to lower-income individuals.

EITC origins: The Earned Income Tax Credit, or EITC or sometimes EIC, is one such tax benefit that gets a lot of attention, a lot of times because of problems with the tax credit.

It's one of the first, and most expansive, efforts to translate public policy into tax law. The EITC was created in 1975 as a way for lower-paid workers to offset the Social Security taxes that take a relatively big bite out of their smaller paychecks.

Since it's a credit, it offsets a taxpayer's IRS bill dollar for dollar. Plus, it's refundable, meaning an eligible individual could get the credit back as a refund.

EITC problems: But the good idea (if you're an EITC fan) is very problematic to execute, primarily because it's part of the tax code.

There are complicated calculations to determine whether a person makes enough money -- remember, the name "earned income" requires a claimant to work -- but not too much money.

Then there are the dependent issues. A maximum EITC of $464 is available on 2011 returns to taxpayers without kids. But the more children a filer has, the larger the credit; up to $5,751 is available to EITC filers in 2011 who have three or more dependent children.

The temptation to bump up the credit amount sometimes leads to cheating on EITC claims. And that's why the IRS has toughened EITC claim verification rules, including a $500 fine for tax preparers who don't adequately check whether a client is indeed eligible for the EITC.

These factors are probably why IRS data show that a lot of folks who could claim the EITC don't. Twenty percent of taxpayers miss out on the EITC, says the IRS, either because they don't claim it or they don't file a return at all.

Claim it if you can: But as with any tax break, if you qualify, you should claim it.

In this current economic climate, that includes some taxpayers who've never considered the EITC before. These are folks who've taken low-paying jobs to get them through layoff difficulties and who now might be eligible.

The table below details the 2011 EITC earning limits and tax credit payouts: 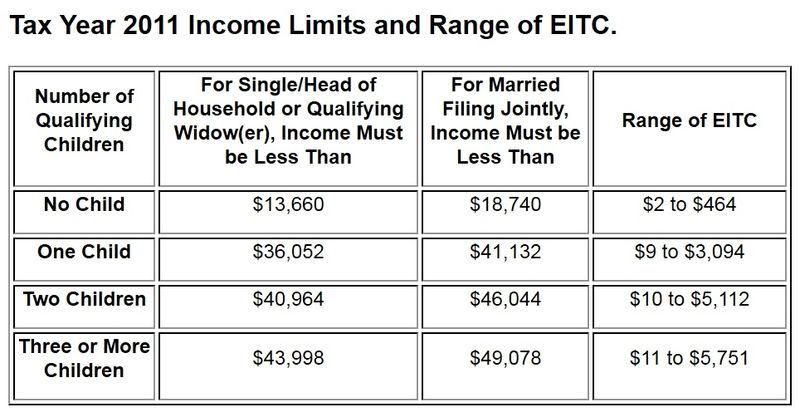 If you want to see if you qualify and if so for how much, check out the IRS' interactive EITC Assistant.

Don't Mess With Taxes is now optimized for readers on the go.
You don't even need an app. Just type dontmesswithtaxes.typepad.com into your smartphone or other mobile device and it will load in a format for smaller browsers.

Well, Romney is a rich man. He's proud if his wealth and says that he can be an example for Americans and teach people how to make money. Maybe it would be good if Romney gave us a few lessons, but I do not really like what he tells. I have an impression that sometimes he is to direct and do not really care for what he says. In these tough economic times there are lots of Americans who are in need of his support and want to hear warm words from him, but he says that he is not concerned. If he's going to be American President he should be concerned about all the Americans and try to make their life better.