It's good to know that most of us are honest, or so we say, when it comes to filing our taxes.

Every year, the IRS Oversight Board conducts a Taxpayer Attitude Survey. For 2011, the board found that the vast majority of those surveyed find cheating on taxes unacceptable. That's been the norm over the years. 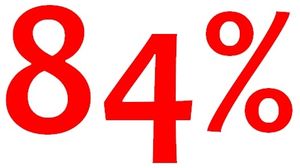 In this latest survey, 84 percent said that it is "not at all acceptable to cheat on one's income taxes."

But our honesty has slipped a bit. The 2011 results were down three points from 2010, when 87 percent said that it was not right to cheat at all on tax returns.

Eighty-four, however, seems to be a popular figure when it comes to disapproving of tax cheating. That's been the percentage of folks saying tax cheating is a major no-no in three of the last five IRS Oversight Board surveys.

And that's why it earns this week's By the Numbers honors.

More tax cheating opinions: Only 6 percent of those surveyed believe cheating "a little here and there" is acceptable. That's down two percentage points from 2010.

But a few more folks in the 2011 survey think it's OK to cheat "as much as possible."

That number went to 8 percent, twice as much as in 2010 and the largest percentage in five years. I guess when times are tough, people will look for any way possible to hang onto a few extra dollars.

And while 66 percent "completely agree" that "everyone who cheats on their taxes should be held accountable," that figure is down 3 percentage points from the 2010 survey.

Overall, though, the survey was good news for the IRS, which relies in large part on taxpayer honesty under our system of voluntary tax compliance.

The vast majority of taxpayers -- 72 percent -- "completely agree" that "it's every American's civic duty to pay their fair share of taxes." That is up 3 percent from 2010's survey.

Why pay taxes? Integrity remains the top reason to pay, according to the 2011 survey, while fear of an audit is down.

Eighty-nine percent say that their "personal integrity" has a "great deal of influence" or is "somewhat of an influence" on whether they report and pay their taxes honestly.

Third-party reporting of financial information to the IRS, which Uncle Sam is always looking to beef up, influences 65 percent of filers when they fill out their 1040s. Thirty-seven percent are influenced "a great deal," with 28 percent saying they feel "somewhat of an influence" from 1099s and the like.

Fear of an audit remains the third most important incentive to pay. It rated a mention as why folks file honestly by 59 percent of those surveyed, down five points from last year.

Have you ever cheated on your taxes? Did you worry about getting caught after doing so?

If you've never cheated on your taxes, what keeps you honest?