Just days after the Internal Revenue Service announced some tax refunds were delayed due to fine tuning of methods to detect tax fraud, the tax agency and the Department of Justice (DoJ) revealed the results of their joint national crackdown on tax-related identity theft.

Now some who are  more cynical than I (and yes, they do exist) might consider the timing of the nationwide ID theft sweep announcement a bit too convenient. What better way to calm down taxpayers frustrated because their refunds are being slowed than by putting that anti-fraud effort into a larger crime crackdown context?

But I'll give the feds the benefit of the doubt this time, since the IRS has long been working to upgrade its anti-fraud and tax ID theft detection programs.

Once the sweep was completed, the feds were looking at 939 criminal charges in 69 indictments and information-gathering actions related to identity theft. 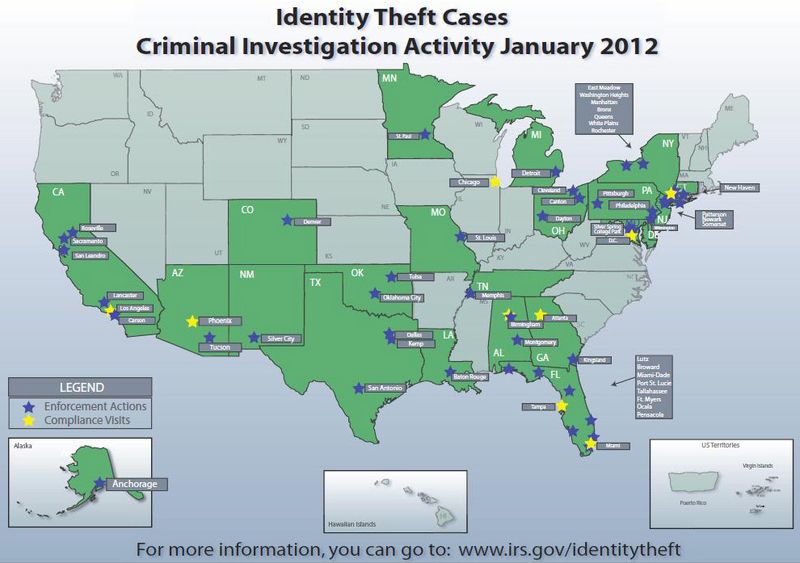 Click on image (or here for PDF version) for larger view.

In addition, IRS auditors and investigators conducted around 150 compliance visits (a much nicer term than, "Surprise! You're busted.") to money service businesses in nine locations that were identified as high-risk: Atlanta, Birmingham, Ala., Chicago, Los Angeles, Miami, New York, Phoenix, Tampa and Washington, D.C.

Basically, the feds wanted to make sure these check-cashing operations know they are on the refund fraud and identity theft radar. The IRS also is auditing more than 250 similar businesses across the country, looking for ID theft indicators as part of that process.

Prevention efforts in place, too: The national effort, according to the IRS, is part of the agency's comprehensive identity theft strategy.

The goal is to prevent tax-related identity theft. But when it does happen, the agency want to discover the schemes and resolve the ID theft cases in the targeted taxpayers' favor as quickly as possible.

To that end, says the IRS, it has stepped up its internal reviews to spot false tax returns before tax refunds are issued. Hence, the slowdown of refunds as that system is fully implemented this filing season.

The IRS says that almost 262,000 identity theft returns were caught before processing, stopping more than $1.4 billion in fraudulent refunds from being issued.

"We have seen an increase (in identity theft) and we are concerned. The rate of fraud has gone up," said Steven T. Miller, deputy IRS commissioner for Services and Enforcement, following the announcement of the IRS/DoJ actions.

The IRS also provides Identity Protection Personal Identification Numbers, or IP PINs, to taxpayers who have been victims of identity theft so that they can properly file their real returns while the IRS and investigators sort out the ID theft situations

In addition to IRS efforts to nab tax-related ID theft criminals and stop fraud sooner, Miller pointed to the agency's Identity Protection Specialized Unit, or IPSU. The IRS also has a special identity theft Web page and the DoJ Tax Division keeps track of its activities in this area at its own Web page.

If taxpayers receive notice from the IRS about possible identity theft, they should follow the instructions in that notice.

And if you think/fear you're at risk of tax-related identity theft because of lost or stolen personal information, contact the IRS immediately so the agency can take action to secure your tax account. Call IPSU at 800-908-4490 and then follow up by completing Identity Theft Affidavit, Form 14039.

Don't Mess With Taxes is now optimized for readers on the go.
You don't even need an app. Just type in the regular dontmesswithtaxes.typepad.com URL on your smartphone or other mobile device and it will load in a format for smaller browsers.