Until Ron Paul is president, don't forget to report your tip income

It's a big day in the Silver State. Nevada voters are caucusing to determine how the state's 28 delegates will be apportioned among the Republican presidential candidate hopefuls.

The road is a little tougher this time. Paul is trailing not only Mitt Romney, who won Nevada in 2008, but also Newt Gingrich.

But the 76-year-old candidate is undaunted and doing his darnedest to court Nevada voters. One of Paul's tax proposals is tailor made for many workers in the state: eliminate taxes on tips. 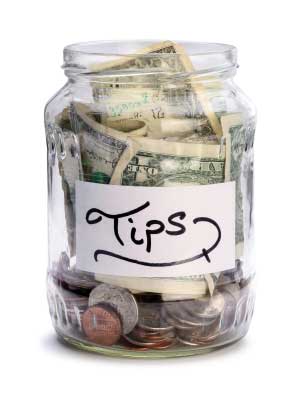 A lot of Nevadans work in the tourist industry. And nearly 20 percent of them regularly pocket gratuities.

So it was not surprising that Paul's call for no taxes on tips was greeted with cheers from a crowd at a Las Vegas campaign stop last week.

The gambling mecca is full of hotel, casino, restaurant, spa, car service and other professions in which workers rely on tip income.

But until their candidate makes it into the Oval Office, today's Daily Tax Tip -- for Ron Paul supporters and all others who receive gratuities -- is to report that tip income.

When you get more than $20 in tips in a month, you are supposed to report the amount to your employer by the 10th of the following month.

Special tax reporting for restaurant tips: Since tips are most common in the food industry, over the years the IRS has established several voluntary tip reporting compliance programs.

More than food servers: While tips are common at restaurants, a few extra dollars are handed out to lots of different workers.

Bartenders, barristas, hairdressers and delivery people are just a few folks who regularly receive tips. Each December, the hubby makes sure to tip our sanitation workers. It's money well spent; a few weeks ago those guys carted away our old, heavy and unwieldy artificial Christmas tree without any complaint.

Like their food server et al colleagues, our trash and recycling crew members and everyone else who gets tips must report that income.

And don't forget that the value of non-cash tips also is considered income and subject to tax.

Don't Mess With Taxes is now optimized for readers on the go.
You don't even need an app. Just type dontmesswithtaxes.typepad.com into your smartphone or other mobile device and it will load in a format for smaller browsers.

great article.. so wath is next?