NASCAR kicks off every new racing season with its biggest race, the Daytona 500.

This 2012 event is getting added attention thanks to driver Danica Patrick and two Republican presidential candidates.

She won the pole for yesterday's Nationwide Daytona race (she'll be running in this second-tier series all year long), but crashed out early. She'll take the green in today's Sprint Cup race from 29th on the grid.

Yes, Danica fans, I know that her starting position today is ahead of series regulars Clint Bowyer, Denny Hamlin and Juan Pablo Montoya, as well as Texas' Labonte brothers, Bobby and Terry, both past NASCAR series champions.

But a lot of folks are skeptical of how she'll finish not only this race, but in her overall financially motivated foray into NASCAR. I'm among them, as I explain in my January Crazy Woman Driver column.

Race political milestones: Danica will get the lion's share of attention today, but presidential politics also is making another venture into America's most popular motorsports series.

During the 2004 presidential campaign we heard a lot about "NASCAR dads," the counter to "soccer moms." While the group of women was seen to be moving to the Democratic ranks, these race-fan men, according to political demographers, were Southern and Midwestern working-class white men who were formerly staunch Democrats, but who started supporting Republicans over the past few decades.

As NASCAR's popularity ebbed, so did the attention to this group of potential voters. Or maybe the national political media just got bored with them.

But politics of sorts did return to the track last November. First Lady Michelle Obama and Jill Biden, the vice president's wife, served as grand marshals of the 2011 season-ending race at Homestead-Miami Speedway to promote their Joining Forces project on behalf of military families.

Yes, I was embarrassed for a sport I like, but then I've seen fan rudeness before. I've been to games where the stands were filled with New York Yankees, Philadelphia Phillies and Philadelphia Flyers fans, though not all at the same time, thank goodness!

Still, the booing of Obama and Biden shouldn't have happened, especially since it was for a totally apolitical cause. But what can you do. Everyone is entitled to their opinions, even when too much beer has been consumed.

But the biggest political moment for NASCAR came in 1984, when Ronald Reagan became the first sitting U.S. President to attend a NASCAR race.

He started the July Firecracker 400 at Daytona International Speedway by giving the "Gentlemen, start your engines!" command from aboard Air Force One. It seems that everyone has at some point had trouble making it to a race on time.

The Gipper finally got to the track, with Air Force One touching down at Daytona International Airport behind the Speedway in full view of the fans.

Reagan, a former sportscaster, briefly sat in with the television race commentators and even called a lap. He stuck around to congratulate the sports King, Richard Petty, who captured his final, and historic 200th, victory that day.

Santorum and Romney, too: Today, politics is squarely back in NASCAR, on the track and in the grandstands. Well, more likely in someone's private luxury box at Daytona.

Rick Santorum's quest for the GOP presidential nomination will be emblazoned on Tony Raines' #26 car. 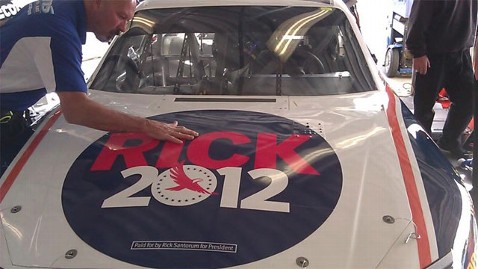 The Front Row Motorsports Ford isn't quite living up to its name. Raines will start 41st in the 43 car field. But the Santorum campaign is making some political points by backing a big underdog, a label that the former U.S. Senator from Pennsylvania still carries despite recent polls.

Mitt Romney, still conventional wisdom's favorite to capture the Republican nomination, won't have a car in the race -- dog carriers aren't allowed on top of NASCAR vehicles; sorry, but I just had to go there -- but he will be at Daytona Speedway.

The green flag will drop around 1 p.m. Eastern time on FOX. Even if you're not a race fan, you might want to check in periodically to see how Danica and Santorum's car are doing.