What should we expect from Berkshire Hathaway's corporate tax return? Judging from CEO Warren Buffett's annual letter to shareholders, the filing could make it into the Guinness Book of World Records. 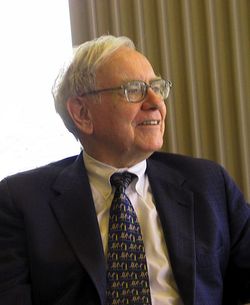 In lauding the efforts of many of the company's employees, Buffett cited "the 23 men and women who work with me at our corporate office" and noted how the "group efficiently deals with a multitude of SEC and other regulatory requirements and files a 17,839-page Federal income tax return – hello, Guinness! – as well as state and foreign returns."

Yep, the Oracle of Omaha's business return, which is due March 15 as are all corporate filings in case you missed the special countdown clock about halfway down the ol' blog's left column, will be almost 18,000 pages.

However, this is one area where Buffett, celebrated for his investing prowess, probably won't come out on top. The perennial leader in huge corporate tax filings is General Electric.

GE filed a 57,000-page tax return last year. Tax watchers expect the document to be about the same this filing season, or more than three times the size of Berkshire Hathaway's return.

This latest Berkshire Hathaway shareholder letter, however, does not mention disputes the company has with the Internal Revenue Service over taxes that the feds say are owed for tax years 2002 through 2004 and 2005 through 2009. Those tax issues were noted in Berkshire Hathaway's 2010 annual report (page 54).

Buffett battles continue: On the personal tax front, Buffett continues to call for higher taxes on himself and other millionaires and billionaires.

In case you've forgotten, he stirred up the tax and corporate world in August 2011 when he announced that his income tax rate was higher than that paid by his secretary. and he called on America, in a New York Times column, to stop coddling the super-rich.

As the debate raged on and moved to a possible surtax on millionaires Buffett clarified his statement, noting that he supports increasing the tax rate on capital gains, which now top out at 15 percent. Most of his money comes from such investment profits, and that explains why he pays lower taxes than his employees.

The prez also wants a so-called Buffett Rule, mentioned in the budget's preface, that would require millionaires to face a tax rate of at least 30 percent.

Since this is an election year, Obama's budget is dead in the water. Truth be told, it was released more as a campaign document anyway.

But Buffett, who's not running for any office, continues to call for higher taxes on investors.

A new tax spat: Now Buffett has gotten into a bit of a spat with state and federal politicians over the issue.

GOP Senate Minority Leader Mitch McConnell of Kentucky, like many bloggers, had already had proposed the same voluntary payment prospect.

"It's sort of astounding to me that somebody that has the responsibility for being the minority leader in the Senate would think that you attack a $1.2 trillion or so deficit by asking for voluntary contributions," Buffett said.

Buffett called the McConnell proposal a "side show," according to Politico, adding, "The real problem we have is we're taking in too little money and we're spending too much. And that's not going to be solved by voluntary contributions."

And the discussions about who pays how much and what type of taxes to assess them will continue at least until the Nov. 6 election.