Republicans and Democrats trying to work out a full-year extension of the payroll tax cut are at loggerheads again.

When the payroll tax cut short-term extension was approved in late December 2011, the measure also included the continuation of unemployment benefits and a Medicare payment tweak. But all three will expire if Congress doesn't act by Feb. 29.

A House and Senate conference committee has been meeting since Jan. 18 to find a way to keep those provisions in place through 2012.

The hope was that the political PR debacle just before Christmas would put the lawmakers in a mood to take care of this quickly when they got back to D.C. for the new session.

This latest process to keep the tax cut etc. on the books has been painfully slow.

And as with most kindergarten Congressional confrontations, each side is blaming the other for the apparent breakdown in negotiations.

Republicans have indicated they want to include restrictions on Obama administration initiatives, such as preventing the Environmental Protection Agency from issuing rules on air pollution from industrial boilers.

And the conferees are nowhere near clearing the biggest hurdle, how to pay for the 2 percentage point payroll tax reduction, continued unemployment benefits and a fix of Medicare payments to doctors.

Prompted by the fear that the matter will once again go down to the wire, Senate Democrats are putting together a backup payroll tax cut plan. "If we have to put it forward, we will," said Senate Majority Leader Harry Reid (D-Nev.).

We'll see if Senate intervention is enough of a threat to get the conference committee on track.

That, along with a new poll that shows most U.S. taxpayers still support keeping the lower payroll tax in place through the rest of the year, might be enough to get a deal done. 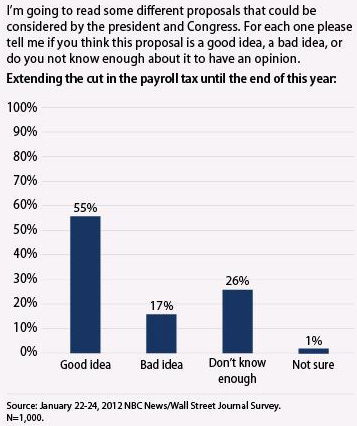 Public opinion/outcry worked back in December. Why not now?

Thanks for talking on behalf of us.

OK and the reason why this tax cut is even a consideration with our deficits, unemployment and medicare problems is what?
Please as Kay states any American will want a tax cut. That is not the question.

Can anyone, I mean anyone, get this country focused on the fact that we need to raise taxes and cut benefits?

This whole thing is so absurd and shortsighted. Guess that really describes Congress and the way things work in DC.

I think Americans, if asked, would want a payroll tax cut, not just through 2012, but through forever.