The U.S. tax system is not, as some folks mistakenly characterize it, a voluntary tax system. Payment of taxes is required by law.

What is voluntary is compliance.

Essentially, the Internal Revenue Service relies on all of us individual taxpayers to report our income, calculate our tax liability correctly, file our returns on time and, if we owe when we file, pay those amounts.

True, in most cases income taxes are withheld from paychecks. But the IRS depends on workers to make sure that amount is correct or close to it.

It's also true that the IRS has some effective tax sticks, aka penalties, to go along with tax carrots, such as tax credits and deductions that can lead to refunds, to get us to voluntarily comply.

Still, some people don't. They are contributors to the tax gap.

The tax gap is defined by the IRS as the amount of true tax liability faced by taxpayers that is not paid on time. 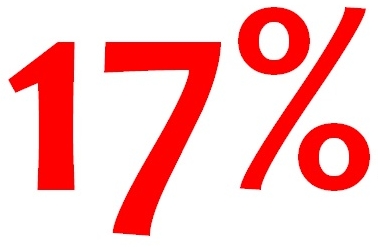 The tax gap got a lot of attention back in 2006 when the IRS did its first analysis of unpaid taxes in 15 years. That study used 2001 tax data.

The IRS recently re-evaluated the tax gap based on 2006 data and found that the voluntary compliance rate for 2006 remained essentially unchanged from five years before at 83.1 percent.

Or, coming at it from the other side, the tax noncompliance rate for 2006 was 16.9 percent.

That means around 17 percent of taxes owed remained unpaid. And that percentage of income tax missing from the U.S. Treasury is this week's By the Numbers figure.

Dollar cost to collections: So what does that percentage of unpaid taxes mean in dollars?

Overall, the IRS found that taxpayers had not paid $450 billion on time in 2006. The tax agency eventually collects around $65 billion via audits and late payments.

Why the gap? The IRS noted that the tax gap growth is largely in line with the growth in total tax liabilities.

Plus, said the agency, some growth in the tax gap estimate is attributed to better data and improved estimation methods.

That said, some old-fashioned reasons remain as the best explanations of why Uncle Sam still isn't getting all the tax money he is owed: nonfiling, underreporting and underpayment.

"As was the case in 2001, the underreporting of income remained the biggest contributing factor to the tax gap in 2006," said the IRS in its release accompanying the new data. The complete breakout:

For those who prefer a visual representation, the IRS put together a Tax Gap Map illustrating who didn't pay and how they avoided their taxes in 2006. 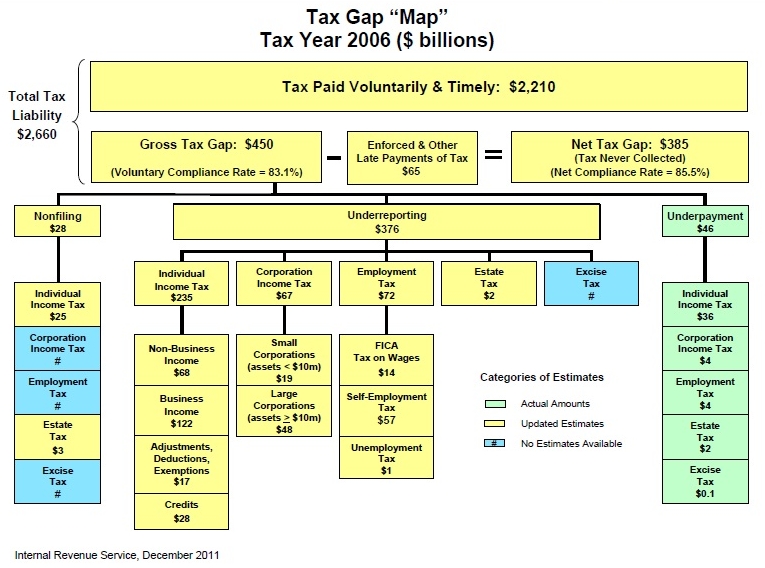 Third party help: The IRS also took advantage of the updated tax gap data to lobby for increased third-party reporting. This is more 1099s to taxpayers that are copied to the IRS so that money is harder to hide.

Overall, noted the IRS, compliance is highest where there is third-party information reporting and/or withholding.

The agency cited wages and salaries that are reported by employers to the IRS on Forms W-2 and are subject to withholding. In these cases, said the IRS, a net of only 1 percent of wage and salary income was misreported.

On the other hand, said the IRS, amounts subject to little or no information reporting had a 56 percent net misreporting rate in 2006.

Great post here and this is huge problem. As for the third piece, the underpayment, this can be deceptive. I have seen in my practice of tax law, that clients do not pay past taxes because they used the taxes due to live on. This is sort of a form of self welfare, if you will. These taxpayers used all of their income to live on and never paid the taxes and still have no income to pay back the older taxes. There are ton of old tax liabilities and tax liens out there that are completely worthless. My though is that every form of income should required some significant withholding at the source to attack this problem, but how feasible is this really?