A couple of years ago -- Yikes! Has it been that long!? -- I asked in a post Are you ready for a Roth conversion? It looked at the elimination of the income limit on converting a traditional IRA to a Roth account. Back then, my fellow personal finance blogger and Twitter pal JoeTaxpayer. was among those who offered some answers to that question so I invited him to elaborate. He graciously agreed to write a guest post then and now he's updated it with 2011-2012 tax data.

Today, I'd like to offer a look at what it would take to be in a higher tax bracket at retirement. 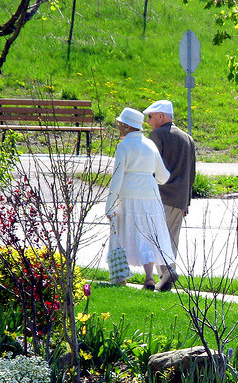 Since no one can say what the tax rates will be in two years let alone 10 or 20, let's look at the numbers for a couple retiring in 2012.

Note there is a withdrawal rate of 4 percent that is commonly used as a safe number to avoid spending down your funds too quickly. Further, I assume no itemized deductions, just the standard deduction, to keep this analysis as simple as possible.

Let's summarize this, and take a moment to think about these numbers. $90,200 is the total income you can have in 2012 and have that last taxable dollar taxed at 15 percent. If you are taking all of that from pretax accounts, you need $2,255,000 to maintain that withdrawal rate.

I find that a chart is the better way to present so many numbers to clarify this discussion and bring the point home.

All of the numbers presented in the text are now shown above. I've added the 25 percent marginal rate as well as the numbers for a single filer. I use the term "zero bracket" to describe the effect of the standard deduction along with the exemption amount, it should not be treated as an official tax term.

Well-informed readers will note that I've ignored the fact that Some Social Security benefits may be taxable. As this occurs at $25,000 for single and $32,000 joint, it lends itself to a completely different dialog, beyond the scope of this article. Suffice it to say that as one gets closer to retiring, this issue does need to be addressed.

This discussion is focused on just how much income (and therefore wealth) it takes to even retire at the top of the 15 percent tax bracket. It would be a shame to convert money and perhaps pay a marginal rate of 25 percent only to find yourself retiring at a lower rate, as most of us will.

On the other hand, if when you do your taxes for 2012, you realize you are currently in the 15 percent marginal bracket, it can certainly make sense to convert enough each year to "fill the bracket," so your last dollar taxed is at 15 percent, but any higher amounts would have been at 25 percent.

Likewise, the same strategy can be used in any year your income drops for whatever reason, a period of unemployment, a spouse taking time off to raise a child, etc.

Remember, the Roth conversion is not an "all or none" decision. For most converts, it's an annual partial conversion that will maximize their wealth and minimize their tax burden.

JoeTaxpayer is the founder of the eponymous www.JoeTaxpayer.com, Financial commentary for the average Joe, where he has been blogging on various financial topics for over three years. You also can follow him on Twitter at @JoeTaxpayerBlog.