Stop me if you've heard this before.

Popular personal itemized deductions, including the mortgage interest tax break and write offs for charitable deductions, would be radically scaled back or eliminated in exchange for cutting income tax rates and leaving enough extra money to help reduce the deficit.

That essentially was the Zero Plan proposed by the co-chairs of the special bipartisan deficit reduction panel, officially known as the National Commission on Fiscal Responsibility and Reform, created last year by President Obama.

But when Alan Simpson, former GOP Senator from Wyoming, and Erskine Bowles, a Democrat who served as President Bill Clinton's chief of staff, issued their report late last year, it was dead on arrival.

Heck, the Simpson and Bowles couldn't even get a majority of their panel colleagues to approve a final plan.

Go back a few more years and the blue ribbon tax reform panel appointed by George W. Bush also called for simplifying the tax code by trading the mortgage interest deduction for a home-related tax credit.

That proposal also was immediately shelved. Seems there was a little problem back then with the idea of doing away with a tax break loved by homeowners and the housing industry, especially as an election year was approaching.

So you have heard this before.

But that hasn't deterred the Pennsylvania Republican from serving up many of the controversial tax proposals again. 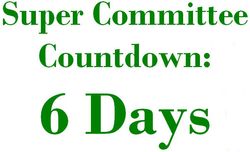 Just what makes Toomey and his supporters think a similar tax plan under the auspices of the Joint Select Committee on Deficit Reduction has any chance of approval now?

"This is a far more practical way to start to scale back the influence and costs of tax expenditures in the code by kind of glopping them together and capping them," Maya MacGuineas, president of the Committee for a Responsible Federal Budget, told the Associated Press. "You're not picking the winners and losers."

MacGuineas might be biased. She was part of a group that came up with a similar tax plan for the National Bureau of Economic Research.

And I suspect that taxpayers losing some tax deductions will disagree about not picking winners and losers in the proposed tax code changes.

It's true that taxes would be simpler and that is something folks say they want ... until they find that simpler means it will cost them more taxes.

Taxpayers who claim the standard deduction instead of itemizing, and that's about 70 percent of filers each year, would see their taxes cut. But the rest of the filers who itemize deductions might find themselves paying more.

Sweetening the tax change pot: Toomey hopes to offset that by cutting the top income tax rate from 35 percent to 28 percent. The bottom income tax rate also would be smaller, going from 10 percent to 8 percent and the rates in between would be reduced as well.

The GOP leadership is divided on Toomey's plan. And the Senator admits that he's willing to make changes to get a version that could pass the super committee and ultimately the full Congress.

I don't know if there is enough time before the Nov. 23 deadline to make that many changes.

The masses are sold cuts in elections and then have their taxes raised post election. And I hope it happens this time around because we need higher taxes and spending cuts soon.

I may have heard it, but I never tire of the discussion.
For my wife and me, now's a great time to kill the deduction. When we bought our house, the interest the first year was over $36K, but after more refinances than I can count, we are doing one last one at 3.5%, and the interest will be less than $10K in the next year.
For others, any buyer with a still high balance or underwater so they are stuck with a high rate, the lack of a deduction can be devastating. When I read about these proposed changes, I always consider those at the margin. Those who don't itemize will benefit if the deduction is replaced by a tax credit, those who are the 1% will survive. But what about those whose budget was tight, every dollar accounted for, with the deduction in place? The $9K benefit from my original mortgage deduction wasn't a windfall in April, it was part of our monthly income, in effect, being used to pay a part of the mortgage each month.
A change to the deductibility would have an impact, potentially pushing the tight-budget people into default. It would also impact the price of homes that are just at the cutoff range, just like the FHA loan limits are impacting those who remain at the edge of that price range. This at a time when housing is already in a precarious situation. The flip side of all this is that with rates so low, now may be the time to move forward with these changes. Our own number reflect an equal drop between our balance dropping by half and the interest rate also dropping by half.

Long term, a flat tax may very well be the answer, but if they scrapped the code altogether what would we have to talk about?