If the Joint Select Committee on Deficit Reduction does come to an agreement later this month, look closely at what industry groups come out OK.

Chances are that companies in the health sector will get what they want based on the amount of lobbying their representatives have been conducting with members of the super committee. 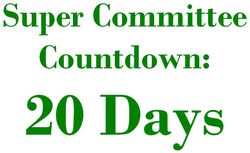 The Center for Responsive Politics analyzed lobbying reports filed last month with the Senate for legislative contacts made during the third quarter of 2011.

Overall, more than 400 companies, unions, trade associations and other groups reported lobbying the bipartisan deficit reduction panel during that period.

And most of those groups were arguing for measures favorable to the health sector.

There were 118 groups lobbying for the health industry, accounting for around 30 percent of the organizations trying to get their messages across to the deficit panel. 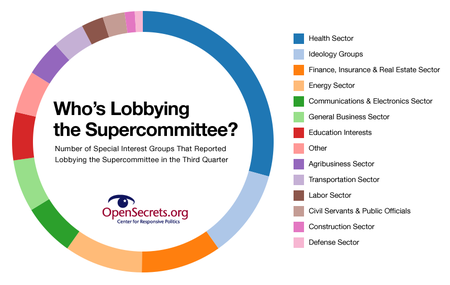 The organizations representing the health field, which is facing potential steep cuts from the special Congressional panel, included the American Medical Association, the American Hospital Association and the Pharmaceutical Research and Manufacturers of America.

Among the 44 groups (11 percent) in this category were AARP, Planned Parenthood, the Center for American Progress, the League of Conservation Voters, the National Council of La Raza, Taxpayers for Common Sense and Public Citizen.

Forty lobbying groups representing the combined finance, insurance and real estate sector ranked third in third quarter lobbying of the super committee. Close behind were reps for the energy sector.

Last in lobbying: Which group didn't worry about what the super committee might do? The defense sector.

The lack of attention is curious since the defense area will face deep automatic cuts if the panel can't come up with a deficit cutting plan by Nov. 23.

But then, the defense sector has some of the best non-lobbyist advocates ever, the U.S. military.

The chiefs of the Army, Navy, Marine Corps and Air Force made a rare joint appearance this week before the House Armed Services Committee and warned Representatives that a pullback in defense spending could cause potential enemies to question the credibility of U.S. military power and challenge America's global interests.

With those guys in your corner, why pay an expensive lobbying firm?