First it was Fed Chairman Ben Bernanke who was the prime target of Republican presidential candidates. 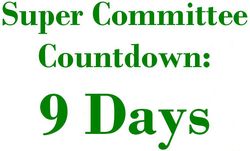 Now one of the surging Oval Office GOP wannabes has a new public enemy #1: the super committee.

Newt Gingrich, the former Speaker of the House who has moved up in recent polls to challenge Herman Cain and Mitt Romney for his party's nomination, has become a big critic of the debt-reduction panel.

Along the campaign trail Gingrich has called the Joint Select Committee on Deficit Reduction "maniacally stupid" and "an invitation to economic catastrophe."

Why the harsh words?

Gingrich believes there's a strong possibility that any super committee plan, due by Nov. 23, will be a halfway measure just to avoid the threat of budget cuts.

As for those impending cuts to defense and domestic programs, Gingrich calls them "totally artificial."

He has a point. Even if the cuts are triggered, they won't take effect until January 2013, giving Congress and perhaps a new Administration plenty of time to make changes.

And that process, including the creation of the special deficit panel in the first place, added Gingrich, is a reflection of Washington's larger problems.

Do you think the panel will make any substantive deficit reduction proposals? Or do you agree with Gingrich that the super committee is a typical Capitol Hill waste?

I don't see committees being of much help. You need a constitutional amendment like government can't be in debt. Government can't make tweaks and expect to actually balance the budget.

Never been a big fan of committees, most of the time they do not do a lot of good. Only time will tell on whether they can actually come up with a solid solution to get us back on track.