Christmas tree fee (it's not a tax) on hold 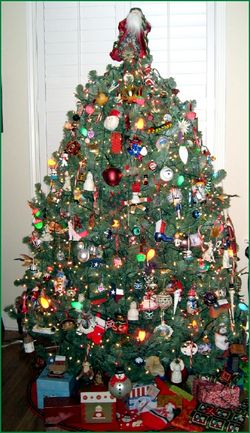 That noise you heard this morning was conservative writers and bloggers slamming Obama as Scrooge for implementing a 15-cent "tax" on fresh-cut Christmas trees.

Second, while the U.S. Department of Agriculture announced the new charge in the Nov. 8 Federal Register, the fee is part of a program that Christmas tree growers themselves, not the Obama Administration, created.

Yes, it's actually a case of the government doing something that private industry requested.

So why did Uncle Sam have to get involved in the first place?

The executive order creating the tree board is authorized under the 1996 Agriculture Act which gives the USDA power to establish agricultural commodity research and promotion orders which "may include a combination of promotion, research, industry information, and consumer information activities funded by mandatory assessments. These programs are designed to maintain and expand markets and uses for agricultural commodities."

There are at least 18 other similar programs already in effect for various agricultural commodities.

Fighting back against artificial trees: And why did the Christmas tree industry ask for the federal help?

Real trees sales reportedly have been dropping; 2007 data shows 32 million tree sales that year versus 37 million in 1991. Some of the diminishing sales can no doubt be blamed on the growing popularity of artificial trees, sales of which at last count reportedly topped more than 17 million.

"This program was requested by the industry in 2009 and has gone through two industry-wide comment periods during which 565 comments were submitted from interested parties," said the National Christmas Tree Association in announcing the board's formation.

The vast majority of comments supported the program, added the tree growers' statement, and a group of Christmas tree farmers and retailers spent nearly three years studying the potential positives and negatives of the promotion and research board, including examining some of those other 18 commodities that have utilized similar programs.

Tree growers hope that the effort, similar to the milk producers panel that gave us "Got Milk?" and the beef industry's "It's what's for dinner" campaign, will help get real trees in more homes this and future holiday seasons.

Basically, the Christmas tree industry wants to make sure everyone has "Got Fir?"

Who pays? As for the tax claim, early reports of which (or at least the headlines) implied that individual tree buyers would be paying, it's not true.

The 15-cents per-tree fee would be collected on imported fresh trees when they cross the border. American tree farmers will pay the fee in February for each fresh-cut tree sold this holiday season. And small growers and all-organic tree farms will be exempt.

And despite the incorrect characterization of the charge as a tax, Agriculture Department spokesman Michael T. Jarvis said that the "fee does not count as a tax, since the industry is effectively 'assessing themselves.'"

As for the possibility that tree growers would pass along the fee, the National Christmas Tree Association emphasized in its statement that the program "is not expected to have any impact on the final price consumers pay for their Christmas tree."

While shoppers might dispute that added manufacturer, or in this case grower, costs aren't passed along to the final purchaser, that concern now is moot.

Tree fee axed: The Obama Administration decided this afternoon that it had had enough with all the tree tax talk and misinformation.

The president is used to being tagged a taxer, but no one wants to be called Scrooge or Grinch. So the tree fee has been pulled.

"I can tell you unequivocally that the Obama administration is not taxing Christmas trees," said White House spokesman Matt Lehrich. "What's being talked about here is an industry group deciding to impose fees on itself to fund a promotional campaign. That said, USDA is going to delay implementation and revisit this action."

So real tree aficionados, don't worry. Your evergreen is safe and fee free.

And if enough folks can be convinced to stop by a real tree lot this year, we might not need to worry about a reprise of this timber to-do next year.

About that tree photo: Yes, the hubby and I are partly to blame for the tree contretemps. We've had an artificial tree for most of our married life.

There are lots of good reasons for choosing fake: Allergies, heavy ornaments that cause real limbs to sag, being able to leave the tree up longer than we probably should. Yes, one year it wasn't put away until Valentine's Day.

But we do buy wreaths, one for the outside of the front door and one to hang inside so we can enjoy the pine smell.

While that won't appease the tree growers, I'm hoping our partial "real" Christmas will get you to cut us a little holiday slack!