It's OK to consider taxes.

That's the message that 40 House Republicans sent via letter Wednesday to the Joint Select Committee on Deficit Reduction, popularly known as the super committee. 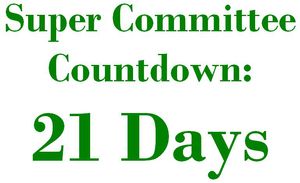 The letter did not include specifics, but rather urges the special deficit cutting committee to consider revenues as part of any plan.

Still, the correspondence is significant because the GOP lawmakers, most of whom reportedly had signed the Americans for Tax Reform no-tax pledge, acknowledged taxes as a deficit plan possibility.

Kudos to the Republicans who have taken this step to help break the ideological stalemate, both on the super committee and within the whole Congress.

Rep. Steven C. LaTourette (R-Ohio) told the Washington Post that if he had a nickel for every one of the Republicans who said they supported the letter's goal but feared how ATR president Grover Norquist would react, "I'd be rich and retired, and we'd have 200 signatures on the letter."

What are these guys and gals afraid of? That Norquist will egg their houses if they change their minds and say it's OK to work together to solve a major issue that affects us all?

The need for a joint effort is what prompted Rep. Cynthia Lummis, R-Wyo., to sign the letter.

The national debt is a problem both parties have created, said Lummis, and both parties must solve the problem. And while she would prefer to reduce the debt without raising taxes, Lummis noted that "this is not an ideal world."

Plus, said the Congresswoman, "Grover Norquist is not in my district. I represent the state of Wyoming and its people."

Is this enough to break the political logjam? My fingers are crossed.