25 years of tax reform. More on the way?

I was working on Capitol Hill in 1986, for a Congressman who served on the Ways and Means Committee. This past weekend, I was at an event where I chatted with another former Representative who also was on the tax-writing committee and we reminisced about those days.

Yes, tax reform consumed our lives back then, but in a very good way. 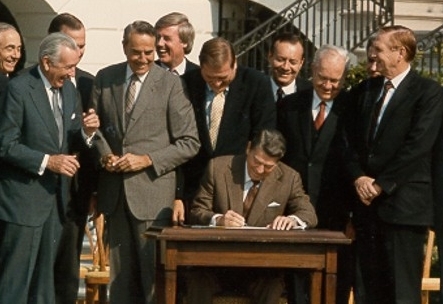 President Ronald Reagan, surrounded by Members of Congress from both parties, signs the Tax Reform Act of 1986 on Oct. 22, 1986.

The '86 tax reform law reduced the number of individual income tax rates and cut the top rate from 50 percent to 28 percent. It eliminated interest expense deductions on personal debt, but retained the home loan write-off. It created passive activity rules and the kiddie tax.

But what I remember most is that the President representing one political party was able to work with the Speaker of the House and Ways and Means chairman who were leaders of the other political party. And each man was a prototypical member of his party.

President Ronald Reagan was a conservative Republican whose comment about government being the problem is still quoted reverently today by his party's faithful. House Speaker Thomas "Tip" O'Neill was a liberal Democrat from Massachusetts. The Ways and Means Committee was strong-armed by old-school Democratic Chicago pol Dan Rostenkowski. And there were the Boll Weevils, wild card Democratic lawmakers who were a constant headache for the leaders of their ostensible party.

Hmmm. Flip the party in charge of the White House, House of Representatives and Ways and Means and substitute Tea Party for the rogue group of legislators and we've fast-forwarded to Capitol Hill today.

Unfortunately, despite the similarities, the prospect of another round of tax reform is unlikely. The country has become too entrenched politically.

Reagan, O'Neill and Rostenkowski were willing to trade tax expenditures for lower tax rates. Now such accommodation of the other side is seen as grounds for virtual expulsion from the party, particularly on the Republican side.

That means that tax reform is stalled, at least until after the next election. When and if reasoned discussions of tax law changes do eventually happen, here are some areas that are likely to be examined.

Home mortgage deduction: This has been called the third-rail of tax deductions. Touch it and you'll lose your seat in Congress. Proponents of the deduction say that without it, many Americans wouldn't be able to buy a home. But homeownership exists elsewhere in the world with this tax break. And some argue that the deduction primarily encourages people to buy more house than they need or can afford.

The deduction also is allowed for second homes. The second-home interest deduction will probably go first, allowing lawmakers a way to chip away at the primary residence tax deduction in subsequent years. It also would be an easier lost tax break for the overall economy and specifically the distressed housing sector to absorb.

Corporate taxes: The most recent presidential advisory board charged with looking at tax reform, the National Commission on Fiscal Responsibility and Reform headed by Alan Simpson and Erskine Bowles, called the U.S. corporate tax "a patchwork of overly complex and inefficient provisions that creates perverse incentives for investment" and that encourages corporate "self-help to decrease … tax liability and improve their bottom line." The Capitol Hill consensus is that corporate tax changes will be addressed first.

Individual tax rates: This is a political winner with one big caveat. Taxpayers want lower income tax rates, but they also want to keep all their current tax breaks, like the already mentioned mortgage interest deduction. This has produced a standoff between lawmakers who want to cut spending in exchange for lower tax rates and those who want to shift taxes to others, such as millionaires or specific sectors like the oil and gas industry.

Will these areas of potential tax reform be examined by the super committee and the full Congress? I suspect not.

I hope I'm wrong. I hope that Republicans, Democrats, loophole loving lobbyists and, yes, deduction dependent taxpayers will see how give and take by all can produce positive results.

Realistic and bold compromise made the Tax Reform Act of 1986 a reality. But those attitudes that were around 25 years ago seem to be in very short supply on Capitol Hill today.