How much more would Herman Cain's
9-9-9 tax plan cost you?

Businessman Herman Cain, who has surged to the front of the Republican presidential nomination race in large part because of his 9-9-9 tax proposal, tried to defend his tax plan on national television Sunday.

Ultimately, though, Cain was forced to admit for the first time that some people with lower incomes would pay more under the plan.

As the former CEO of Godfather's Pizza explained how his plan would eliminate what he calls embedded taxes, David Gregory, host of the NBC news show Meet the Press, challenged Cain, saying "it's incontrovertible, some people will pay more" under the 9-9-9 plan.

Visit msnbc.com for breaking news, world news, and news about the economy

Just who will pay fewer taxes? Cain said "those who spend more money on new goods will pay more."

So get ready to head to consignment shops American shoppers. But what will manufacturers of new products do if the tax system makes their goods less appealing?

Citizens for Tax Justice, a progressive Washington, D.C., think tank, says Cain's proposal would provide a $210,000 tax cut for the richest 1 percent of American taxpayers and a $2,000 tax hike for the bottom three-fifths of taxpayers. 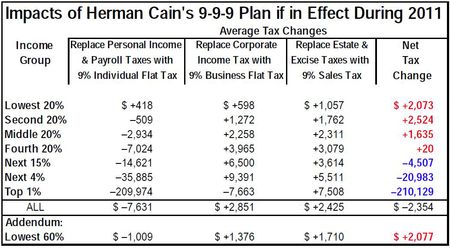 Moreover, says CTJ, the United States government would collect about $340 billion less in revenue in 2011 alone under Cain's plan.

It looks like my prediction is coming true that as more details come out about 9-9-9, the less appealing the plan will be.

Even with its flaws, the 9-9-9-9 plan would create an economic windfall by lowering the top corporate rate to 9% from 50% (35% at the corporate level and 15% on dividends taxed at the individual level), and simplifying the tax code to reduce unnecessary compliance costs and the economically inefficient behavior that is created by perverse tax incentives. These changes alone will make America far more globally competitive. Also by taxing individuals based more on what they spend rather than on what they earn, the plan will encourage more savings (which is a key ingredient for economic growth). As a result, the economy will grow faster, generate greater output of goods and services, and create more jobs.

Thanks Kay, for your information on this topic.

That may be a little to much!