The gloves have come off in the taxes and deficit reduction fight, but not how you probably expected.

A Republican Congressman today blasted anti-tax crusader Grover Norquist, founder of Americans for Tax Reform, and his much publicized demand that GOP members vow not to support any new or increased taxes.

Saying so isn't enough. Grover came up with the no-tax pledge for them to sign.

I'm reminded of that first apartment lease that I didn't read closely enough in my enthusiasm to be out on my own. I was never so glad as the day when that document expired.

Norquist's pledge, however, has no ending date. And its intransigent nature is causing lots of problems as lawmakers look for some mutually agreeable way to work out America's fiscal difficulties.

That is disturbing to Virginia Rep. Frank Wolf.

Ideological purity paralysis: "Have we really reached a point where one person's demand for ideological purity is paralyzing Congress to the point that even a discussion of tax reform is viewed as breaking a no-tax pledge?" asked Wolf from the House floor today. 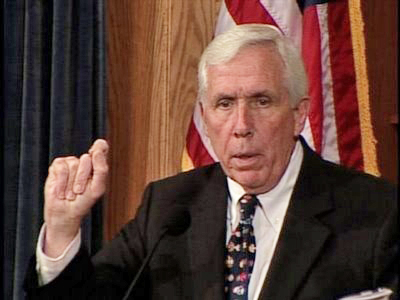 Wolf, a member of the House Appropriations Committee and one of a handful of Republicans who hasn't signed Norquist's no-tax pledge, blamed the document for preventing an open conversation about how eliminating tax credits and deductions could help reduce the deficit:

"I understand that some may not agree with what I say today. I also know many are not aware of Mr. Norquist's associations. But my conscience compels me to speak out.

"Reasonable people can disagree on the merits of pledges -- and I respect those differences -- but the issue is with the interpreter and enforcer of a pledge.

"William Wilberforce, the British parliamentarian and abolitionist, famously told his colleagues, 'Having heard all of this, you may choose to look the other way, but you can never say again that you did not know.'"

Wolf's full statement will be printed in the Congressional Record, but he also posted it, and his floor statement, on his website and urged his fellow Representatives to read it for more details on the no-tax pledge issue.

In the statement, Wolf cites "our inefficient and burdensome tax code" as a factor in "undermining consumer and business confidence, further weakening our fragile economic recovery."

And he calls for comprehensive tax reform "to rid our tax code of earmarks and loopholes that promote crony capitalism and let Washington pick winners and losers."

Both political sides fight, citizens lose: The cronyism that Wolf denounces is on both sides.

Ideological gridlock pits those mostly Democrats who oppose any change in entitlement programs against the mainly Republicans who refuse to listen to any discussion of tax creation or increases.

But the country is the big loser.

And the asinine no-tax pledge is part of the reason why.

I've castigated members of Congress before for acting like elementary school kids, but the pledge signing is straight out of junior high. A bunch of awkward middle-schoolers who are so afraid of not getting into the cool clique that they agree to form a super special club.

Wake up, men and women. You are in a special group, the United States Congress. And the only pledges you need to make are to serve your constituents and uphold the Constitution. Everything else is excessive grandstanding and divisive BS.

GOP presidential candidate Jon Huntsman nailed it in June when he turned down Norquist's "invitation" to sign the pledge.

"First of all, I don't sign pledges," said Huntsman. "I was asked to sign a pledge when I ran for governor in 2004, and I didn't. And I got attacked because I didn't. And then we went around and ended up cutting and reforming taxes at record levels [and] I never heard anything in the aftermath of our work. My take on all of this is, your record should say everything about where you are and where you're going. I don't need to sign a pledge."

"Conservatives of all people should not be locked into any ideological position," Wolf said in his statement. "We are bearers of a conservative tradition. Conservatism is not an ideology; it's not doctrine or dogma. It is a way of seeing life. It draws on the wisdom of the past to view events of the present. We all stand on the shoulders of the great people who have gone before us."

Even if you're the most liberal Democrat it the country, you've got to be applauding Wolf today for publicly standing up to Norquist's no-tax pledge.

Let's hope a lot of people are listening.