3.8 percent health care tax does not apply to all home sale profits

A misleading and fear-mongering anti-tax chain email aimed at homeonwers is back.

It first appeared in 2010 during the health care reform debate. I'm not surprised it's again showing up in in-boxes, but I thought it might resurface a little later, as the 2012 presidential election heated up.

Here's what the deceptive email says:

Why 2013? Could it be to come to light AFTER the 2012 elections? So, this is "change you can believe in"? Under the new health care bill all real estate transactions will be subject to a 3.8% Sales Tax.

This bill is set to screw the retiring generation who often downsize their homes. Does this make your November and 2012 vote more important?

Oh, you weren't aware this was in the Obamacare bill? Guess what, you aren't alone.

There are more than a few members of Congress that aren't aware of it either.

I hope you forward this to every single person in your address book. VOTERS NEED TO KNOW.

Here's what voters need to know.

What's correct: This email, which includes a link to an April 2010 GOP.gov blog post, is using an age old trick, usually employed by scammers, of taking a kernel of truth and twisting it to another purpose.

The correct element is that there is indeed a new 3.8 percent tax that is part of the Patient Protection and Affordable Care Act, aka health care reform or Obamacare depending on your political position. 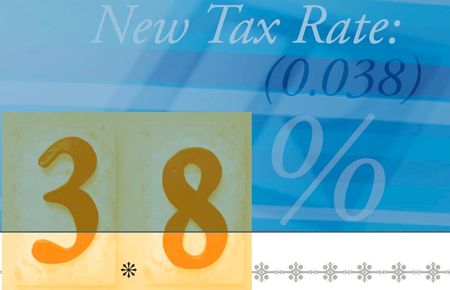 And yes, 2012 is a pretty fallow year for tax changes precisely because politicians on both sides didn't want to have to deal with their tax votes, both yea and nay, in an election year.

Such timing of legislation, like the expiration of the Bush tax cuts after that Administration was out of office, is standard operating procedure in D.C.

What's wrong: But it is not, as the email claims, a 3.8 percent across-the-board sales tax on home sales.

It is a Medicare tax on investment income of higher-income households. Essentially, it is an added income tax on wealthier filers.

In 2013, it will be assessed on income received as a profit on the sale of investment property, which could be real property but is not limited to that type of asset sale. Typical investment income includes capital gains, dividends, interest payments and, for those who own rental property, net rental income.

And the tax won't affect most taxpayers. It will be collected only from those deemed by the legislation as high earners.

As for sales of principal residences, those homes in which you, I and rich folks spend most of our time, the tax will only apply to those wealthier homeowners who net more than the home-sale capital gains profit threshold. That's $250,000 for a single seller or $500,000 for a jointly filing married couple.

Home sale profit at or less than those thresholds will remain tax free, even after this tax goes into effect in 2013.

And where a home seller gets a really great price, the 3.8 percent tax would apply only to the profit amount in excess of the filing status applicable threshold.

And if you and your spouse sold the home, then you're off the tax hook since the presumed $400,000 profit is less than the $500,000 tax-free home sale profit allowed a married joint filing couple.

Realtors react to the rumor: As soon as this false home sale tax rumor hit the Internet last year, the National Association of Realtors (NAR), the professional organization that stays on top of all things home sale related, jumped in to set things straight.

"This became an Internet rumor that took off like wildfire," NAR spokesman Walter Molony told the Atlanta Journal-Constitution.

"We've seen where someone thinks the whole gross sales is going to be taxed 3.8 percent," Bill Murray, a Prudential Georgia Realty broker in Atlanta, told the newspaper, adding that real estate agents are ready to explain, but there are fears that the rumor might prevent sellers or buyers from acting.

To counter misinformation about the tax that could further cripple the housing market, the group has a blog post and video explaining that The 3.8% Tax Is Not a Real Estate Transfer Tax.

Voters do need to know: There is one thing in this duplicitous email with which I totally agree. Voters, along with taxpayers and homeowners, do indeed need to know about the tax.

However, they need to know the truth, not the politically motivated version being spammed into email boxes across the country.

If you disagree with the 3.8 percent investment income tax, fine. Let your Representative and Senators know.

But at least make sure you don't sound like an idiot puppet spouting incorrect information when you make your anti-tax argument.

Great article. For more on this sinister tax relating to other passive income your readers may be interested in 2013 SNEAKY NEW TAX at http://www.sjfpc.com/medicare_tax_2013.html
Hope this is of service to your readers.

Thanks, Kim. Sorry about the share/like button. It seems to be working for me, but I'm using Firefox. I see some others have shared it. Maybe it was a temporary glitch.

Hi Kay, I love your blog along with a few other tax blogs. I wanted to share this on my business fb page but your share button doesn't seem to be working..awesome post! :)