Are you ready for some football, er, taxes?

The 2011 college football season is underway, so that means there's already speculation about who will face off for the national title in the BCS Championship game on Jan. 9, 2012, at the New Orleans Superdome.

I'm more a fan of pro football, probably because my alma mater doesn't have even a remote chance at a national college football crown. But good old Texas Tech University usually manages an invite to one of the lower-tier bowls.

This season, I'm pulling for the Gator Bowl.

It has nothing to do with the Red Raiders. Regardless of how well they play, they won't be in this bowl. It has a deal for a Big Ten team and an SEC squad to go head-to-head.

And it's not that I have any close ties to Jacksonville, although Florida in the winter is generally a good idea. 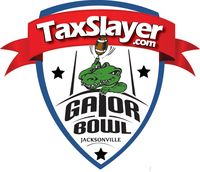 I've become a Gator Bowl booster because it now has a tax connection.

TaxSlayer.com has signed a three-year deal to be the official sponsor of the Gator Bowl. The first tax-affiliated game will be Jan. 2, 2012, at Everbank Field.

The college bowl game is further expansion into the world of sports sponsorship for the Augusta, Ga.-based tax software company. Now I've never used TaxSlayer to do my taxes, so I can't vouch for how well it does that job. I do, however, have some tips on picking the tax preparation software that works best for you.

And I'm not getting anything for mentioning the company's new sports deal, although I do have a couple of oversized TaxSlayer tote bags that I picked up as giveaways at IRS Nationwide Tax Forums where the company had a booth in the exhibit hall.

I'm just reporting and yes, kind of pulling for, the firm's paid sports partnerships because I'm a tax geek and I like to see tax references outside the expected April 15 box.

The head of the Gator Bowl shares my enthusiasm for the unusual sponsor.

"We love the name," Gator Bowl president Rick Catlett said after making the announcement. "One thing you can say is that it attracts attention."

Sounds like a good idea, we like to slay our taxes hear in Florida just as much as the next guy.