Solar tax breaks in the wake of Solyndra

The power of the sun has been quite evident in Austin this year.

We got our first triple-digit thermometer reading in May. Yesterday marked our 85th day of 100 degrees or more, smashing the 2009 tally of 69 really hot days.

All this sunshine makes me wonder why every house in the Lone Star State isn't built with solar energy systems. 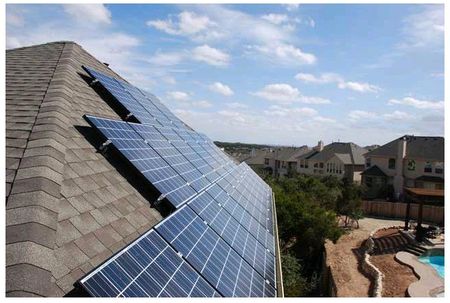 Yes, I know it's expensive, but if we're really in an extended cycle of overly warm weather, it would quickly pay for itself after a couple of summers.

Trust me. I just got our latest electric bill. They've been hitting unwelcome triple digits, too.

Solar tax savings: Solar energy is getting a lot of other attention this week because of the bankruptcy of Solyndra and the role of the Obama administration in approval of a federal loan for the company.

When the Silicon Valley-based firm got the money in 2009, it was hailed by the administration as an example of green energy programs. Obama opponents now are having a political field day with Solyndra situation.

But the situation, both political and business, could affect the future of the industry, as well as tax breaks for solar enterprises and consumers who utilize them.

For now, however, individuals who install solar energy systems still can get a substantial help from Uncle Sam in covering those costs.

The first big benefit is the type of tax break. It's a credit, which is a dollar-for-dollar saving.

Even better, the solar tax credits are for 30 percent of the energy-saving system's cost. That's it. A flat 30 percent. No upper spending or credit amount limit. And it covers installation costs.

The solar unit tax credit also applies to improvements of existing homes and new construction. And solar upgrades to both the home you live in, known in tax speak as your principal residence, and second homes qualify.

Credit qualifications: Of course, there are some requirements.

At least half of the energy generated by the solar unit must come from the sun. The system must be certified by the Solar Rating and Certification Corporation (SRCC).

And as for the credit itself, it's not refundable. It means what it sounds like.

In the example above, if your tax bill is $2,500 then you don't get the $500 of your home energy improvement tax credit as a refund.

But, as enrolled agent Bruce Tyler points out, you can carry forward that extra energy tax credit to the next tax year.

Look for local help, too: Also check out possible state and local help to pay for your improvements.

Many communities offer Property Assessed Clean Energy, or PACE, loans that are paid off incrementally at tax time by the current owner of the house. The annual cost, typically less than the energy savings provided by the investment, is shared by successive owners of the home.

Check out the Database of State Incentives for Renewables and Efficiency, or DSIRE, for details in your location.

I know these home upgrades are expensive. But they're at least worth looking into, especially as long as the tax code offers to help you pay for part of the program.

Nancy, I'm not sure which article you're referring to, but the alternative fuel tax credits (solar, wind, fuel cell, geothermal) are available on eligible residential energy upgrades done through the 2016 tax year.

Solar tax??I do not know..I am hearing for the first time..I don't think so that we have such thing in our country..

Shame that this Solyndra controversy may hurt the much needed trend for home owners to save money and become greener. I just read that appraisers can now give a value the green features a home has.

You do NOT lose any unused credit. It is carried over to the following year.