To be such a lightweight show, MTV's Jersey Shore sure gets involved in some serious tax situations.

Now on a state level, some New Jersey lawmakers are urging Gov. Chris Christie to veto the $420,000 state film tax credit awarded this week to the so-called reality program about a group of friends who spend way too much time together, both at Atlantic Ocean beaches and this season in Italy. 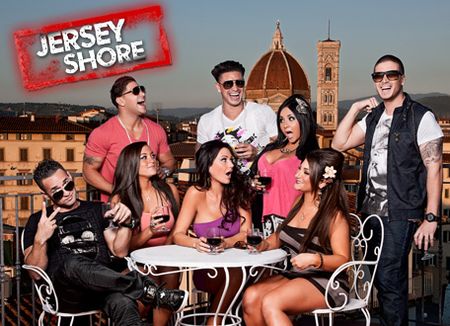 This real life tax controversy over Jersey Shore is just the latest brouhaha over taxpayer support of creative arts. And it earns the program and the tax break this week's Follow-up Friday spotlight.

Tax credit troubles: Many states have or are in the process of repealing tax breaks for movies and television programs.

A court battle just wrapped in Iowa over abuses of that state's film tax credit. Random question: Does Iowa allow cameras in the courtroom?

And here in Texas, popular native son filmmaker Robert Rodriguez saw his immigration themed satiric film Machete panned by the state's film commission. The panel denied the Lone Star State's film tax break to the movie because its content was deemed to be not the type of message the state wanted to send.

It's too bad the New Jersey film and TV tax credit doesn't contain such an out for its legislative film critics.

Democratic State Sen. Joseph Vitale, in citing negative stereotypes of young Italian-Americans, told NJ.com that "the governor needs to step up for decency and veto this. If the show wants to go somewhere else, let 'em,"

Michael Drewniak, spokesman for Christie, said although the governor dislikes both show and the incentive program, he cannot veto the credit issued by the state Economic Development Authority.

Although the credit rules say the funds are subject to potential vetoes, Drewniak said the tax credit program is non-discretionary and the Jersey Shore production company met guidelines.

Dealing with distasteful programming: The New Jersey legislature has a few choices.

N.J. lawmakers can pass a law to give state officials more power in denying the tax credit.

Or they can end the film and television tax credit program altogether. Christie, a vocal opponent of the tax break, would sign that law in a heartbeat.

Or they can hope that MTV will cancel Jersey Shore. Unfortunately for Garden State lawmakers and fans of good television, that's not likely to happen any time soon.

Yep, it definitely looks like the beach house will continue to be full of guidos and guidettes for a while.