Wartime project mismanagement, lax federal oversight and outright corruption by contractors could end up costing U.S. taxpayers as much as $60 billion.

The eight-member independent commission was established by the National Defense Authorization Act of 2008 to study the costs of U.S. efforts in Iraq and Afghanistan. Congress charged the bipartisan panel with studying federal agency contracting for the reconstruction, logistical support of coalition forces and the performance of security functions in those countries.

"Based on research and hearing testimony, the Commission estimates that waste and fraud have amounted to at least $31 billion, and possibly as much as $60 billion, during the operations in Iraq and Afghanistan," noted the Commission leaders in a statement accompanying the final report.

The Commission's report notes that contract waste, fraud and abuse take many forms:

The bottom line: Uncle Sam is over-relying on contractors. 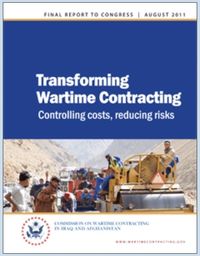 "Some contractors have been performing tasks that only federal employees should perform, while others are doing work that is permissible but still too risky or inappropriate for contractors," said Commission co-chair Christopher Shays, a former Republican Representative from Connecticut.

"The government has known for 20 years that contractors would be a key part of any major response to large or sustained hostilities or major disasters. Yet the government was not prepared to go into Afghanistan in 2001 or Iraq in 2003 using large numbers of contractors, and is still unable to provide effective management and oversight of contract spending," added the Commission's other co-chair Michael Thibault, former deputy director of the Defense Contract Audit Agency.

The 240-page final report documents the Commission's research, hearings, meetings and briefings, domestic and overseas travel and the work of professional staff stationed full-time at Commission offices in Baghdad and Kabul.